Share All sharing options for: Fashion-blogging the Ladies, Part 1

Well. I didn't have the plan to do this, but I was so struck by the costumes in the short program that I had to give a little critique. I decided that it was time to give out some recognition to the most interesting (ugly? heinous?) costumes I can remember seeing in a long time.

Best use of that nude stuff in a costume:Well, this was a tough one. There were a lot of ladies who just couldn't resist that nasty sheer nude material that I am guessing is supposed to give off a different look to the crowd than it does to the television cameras. But - does it even work for the crowd? I have only ever been to skating exhibitions and professional competitions and I don't recall this being as big in those types of settings as it appears to be in the amateur competitions. So, if anyone has seen this in person and would like to chime in about how awesome it is, let me know.

But I digress. My preference is for Bebe Liang, because she didn't try to pretend that she had some sexy off-the shoulder thing going on and she used sequins (crystals?) well. I have no idea how to post photos wherever I want in this blog so I apologize for these links to what I'm talking about.

Best attempt at making me hate my hips even more:

Kiira Korpi, why do you haunt me so? With your seemingly French-inspired costume that included a black and white HORIZONTALLY-striped skirt, even Peggy Fleming pointed out that most people cannot get away with a striped skirt. You were just trying to make me feel bad. Also, when you skated out, my boyfriend thought you were Gwen Stefani for a second, and I guess I can kind of see the Gwen vibe in your costume, so you also get a prize for that.

Well, Terry Gannon may think worlds veteran Julia Sebestyen of Hungary was wearing the same chartreuse color as Peggy Fleming did in her 1968 Olympic triumph, but Peggy was not having it.

Gannon: "Wearing Peggy's dress I think - the famous one..."

Fleming: "Well, it was green, it wasn't quite that bright..." Oh, Peggy. How dare they compare your elegance to the trapeze artist getup that Sebestyen was sporting! I don't blame you for cutting Gannon off.

Carolina Kostner. It may also have been the only use of a catsuit, but man, that is brave. 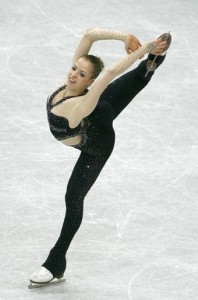 Best Use of Balloon-type shapes in the Costume: 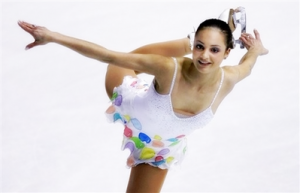 Sarah Meier of Switzerland. Your program was delightful and lighter than air, so it only makes sense that you had what I interpreted as balloons making up the skirt of your costume. Still, it was a risky choice, and I can only imagine the meeting with the designer.

Designer (with French/Swiss? accent): You are so lovely! You must ave something so light and cute zee audience will zink, 'who is zat cute leetle girl? I love her. She must win!' You must ave puppies. Puppies or ice cream on zee skirt. Or balloons.

And balloons it was.