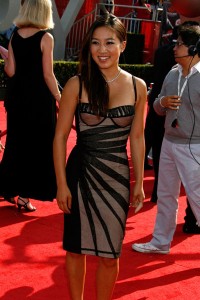 First of all, earlier, I mistakenly said the ESPYs would air tonight. WRONG. They will be on ESPN on Sunday at 9pm EST. Also, Michelle Kwan is definitely going to be there!

Unfortunately, she is going to be there in a repeat dress, because, according to Hip Candy, her dress has already been worn by Khloe Kardashian of Keeping up with the Kardashians, and Lauren Conrad of The Hills (second Hills reference in one morning, YES). Anyway, poor Michelle (and not just because the dress looks like her bra exploded). I wonder if she was told that she had the exclusive on the dress. I doubt she would have worn it to a red carpet situation if she had known how many times it had been photographed before.

Ah, but Michelle really cannot look bad, even if I'm not a fan of the dress (mostly not the top, anyway), and I can't wait to see her on the ESPYs.