Watch Out for those Teddy Bears!

Share All sharing options for: Watch Out for those Teddy Bears! 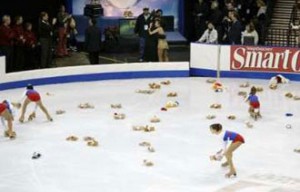 Ever wonder what it takes to become a flower sweeper at a skating event? Well, thanks to The Herald, now we know just what the youngsters trying out to be Skate America flower sweepers are going through. It's take no prisoners:

About 24 kids and some alternates will be needed for the three-day event.

That doesn't mean, though, that 24 of the 30 who auditioned will be chosen -- it depends on their skating skills. After each performance during the ­competition, the next scheduled skater or skaters immediately come onto the ice and start warming up.

The kids have to be quick and smooth.

"They've got to make sure they pick up those things without running into the new skaters," said Kirsten Early, president of the Everett Figure Skating Club, who was helping with the auditions.

If enough kids don't make the cut, they'll be holding other tryouts until they get enough. The young skaters will have to make it around the arena twice and skate backward, and then they have to pick up stuffed animals. All the while avoiding competitive ice dancer Selah Early, who is helping out with tryouts.

Many of the kids auditioning are aspiring skaters. Good luck everybody!