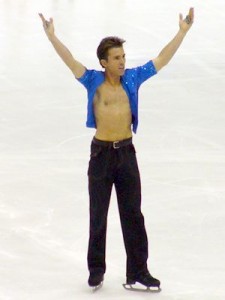 We recently spoke with two-time Olympian and three-time United States National Champion Michael Weiss. We asked him about his foundation, his upcoming ice show fundraiser in Virginia, as well as his view of the way things are going in figure skating under the current code of points.

When Michael Weiss was a young skater coming up, he relied on the kindness of family, friends, and many generous strangers within the community to finance his skating lessons. His parents were both gymnasts (his dad was a U.S. Olympian) and athletics ran in the family, so there were a lot of lessons to pay for. In addition to Michael, his sister was also a national level skater, while the other sister was a diver.

So Weiss made a promise to himself: "I said if I ever reached a point where I could use my figure skating status and name to help other skaters, I would." And after several years at the top of the U.S. and world skating scenes, Weiss made good on that promise; he used his own money to start the Michael Weiss Foundation (MWF) in 2004 with the aim of providing grants to promising skaters with financial need.

Only four years later, the foundation has awarded more than $115,000 to about 15 skaters over the years – with many skaters receiving multiple annual awards. And Weiss and his foundation’s board (which includes Weiss’ coach Don Laws and several skaters, among others) have a knack for spotting talent; among the scholarship recipients are U.S. National Ladies Champion Mirai Nagasu and Junior World Mens Champion Adam Rippon.

"Mirai Nagasu kind of came on the scene out of nowhere, she hadn’t even qualified for a national championship three years ago when we started giving her scholarships," says Weiss, adding, "It was nice to be able to help her when she needed it to get through the difficult times when she didn’t have the finances."

Scholarship recipients are chosen based on skating potential and financial need (their family income must be less than $150,000 a year).

And it’s not just about the money.Weiss says the foundation also provides a means of offering motivational support to up and coming skaters, by bringing them into contact with the established figure skaters who participate on the board and in the shows. Weiss remembers being at his first national championships and having U.S. Champion Christopher Bowman nod at him in acknowledgment. Although he assumes the late Bowman didn’t even know who he was, Weiss says the gesture made an impact on him and he hopes the exposure he helps facilitate with other skaters will motivate his scholarship recipients. "The fact that someone like Brian (Boitano) or Todd (Eldredge) or Sasha (Cohen) even sees these kids skate, that goes a long way to motivating and inspiring the next generation." Inspiring younger skaters is a responsibility Weiss believes should be taken seriously.

MWF’s major fundraising activity is an annual benefit called "US and World Champions LIVE"It normally takes place near Weiss’s home in Northern Virginia on donated ice. This year’s event is at Kettler Capitals Iceplex in Arlington, Virginia on September 6. The event gets bigger every year; this year it accommodates 1,000 spectators and features Boitano, Eldredge, Cohen, Nagasu, Mens World Champion from Canada Jeffrey Buttle, and others. The skaters donate their time. Weiss says he hopes the event generates $65 – 70,000. The show also features a silent auction of donated prizes and a VIP reception afterwards.

One of the joys of the program is to see someone like Nagasu go from relative obscurity to being one of the top skaters in the world, and "one of the headliners of our show," says Weiss.

In addition to skating in various exhibitions each year and with "Stars on Ice," Weiss follows the current Olympic eligible skaters and offered some insights on the state of skating. Weiss was the first American to land the quadruple toe loop in competition, and we asked him if he thought quadruple jumps are no longer necessary for success in male skating, given that Buttle won this year’s world championships without a quad.

"I don’t know if ‘no longer’ is a good term," says Weiss. "I think that’s a stage that it’s going through right now. I don’t necessarily think that’s necessarily going to be the norm." Weiss points out that there appears to have been a generational change in skating. In his generation of skaters, such as those competing at the 1998 Olympics, it was understood that whoever did the quad was going to win. "Ilia landed it and he won." He says by 2002, it was known that the quad was of the utmost importance. When the code of points was implemented in 2004, it demanded a different kind of skating, and a new generation of skaters was born. He says World Champions Brian Joubert of France and Stephane Lambiel of Switzerland may be some of the last skaters who place such an emphasis on quads. Meanwhile, now skaters find that the "risk vs. reward" isn’t necessarily there for quads; competitors learn to be savvy about the system and make up the points in other ways. That’s not to say they don’t do quadruple jumps (they often do), but it’s become a system that can be commanded without necessarily having a quad in every program, as Buttle demonstrated.

Weiss says of Buttle: "Jeff is a great skater, he’s a very well-balanced skater, he does the spins and footwork and he’s very good artistically and musically…He’s perfect for the system." However, he adds that, "Back in 2002, the programs he did technically wouldn’t even come close to [winning]…No matter what the guys who didn’t do quads did, they couldn’t beat the guys who at least attempted quads."

Weiss says he knows the code of points is a work in progress, and he thinks that the quadruple jumps will be rewarded more in the future.He adds that doing so would "certainly make it more interesting for the audience." Weiss says although male skating may not be as ambitious technically as it used to, the ladies aren’t backing down, and he says he’s impressed by Japan’s Miki Ando’s quad jump skills, but he knows that it’s not yet worth the risk for her to throw it often in competitions. And Weiss admires U.S. National Champion Evan Lysacek, who he says takes a risk by putting a quad in his short program.

As for the upcoming season, there are several skaters Weiss is keeping an eye on. He’s excited to see Nagasu and the Japanese ladies. And on the men’s side, in addition to being interested in the ongoing Lysacek/Johnny Weir rivalry, he is looking forward to seeing Lambiel and Joubert.

Closer to home, Weiss and his wife, Lisa are seeing the family athletic tradition continue with their children, who are interested in hockey and other sports.When Weiss isn't shuttling them back and forth and playing carpool, he’s back on the ice or doing work for his foundation and his upcoming show. "It’s a great cast of skaters and the only way we could get everybody in one place is because they all donate their time," says Weiss, and he lauds the fact that "everybody is generous enough to do that."

For information on the Michael Weiss Foundation or for tickets to U.S. and World Champions LIVE, visit the foundation's website.