Oksana Baiul and the Post-Olympic Experience

Share All sharing options for: Oksana Baiul and the Post-Olympic Experience 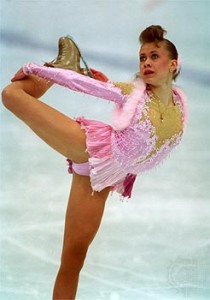 Oksana Baiul gets a mention in a New York Times article about serious problems that Olympians have carrying on with their lives post-Olympics.

"Many reported that this was the only life they knew and it was inconceivable to do anything else," Ungerleider wrote in the study, published in 1997.

Athletes handle the loss of identity in diverse ways. Some, like Eric Heiden, the speedskater who won five golds in 1980 and later became a surgeon, quickly channel their drive into another profession. Others, like Oksana Baiul, winner of gold in figure skating in 1994, struggle with alcohol and other problems. Baiul bounced back to start a clothing line and skate professionally.

The article states that some Olympians have a desire to stay famous, while others just need goals to work toward. It also cites a study by Dr. Steven Ungerleider that found that 40 percent of Olympians surveyed had serious problems post-Olympics.

In Baiul's case, one could argue that the Tonya/Nancy drive up of interest in figure skating was the worst thing that could have happened to her. The attention brought her an unprecedented amount of money for a 16-year-old figure skater and she didn't maintain the support system she needed to deal with all the fame and fortune. Thankfully, she's doing better now!