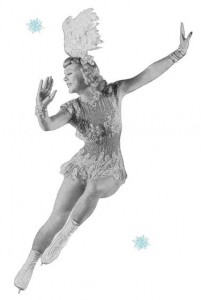 The Hollywood Reporter writes about whether the Olympic success can translate to success in the movies. (Similarly, I blogged about figure skaters trying to make it as actors awhile back). The article focuses on Michael Phelps but it does give a shout-out to two time Olympic gold medalist and figure skating screen queen, Sonja Henie.

In a pre-endorsement age, Hollywood would scour the Olympics for athletes and slot them into movies, as they did with Norwegian figure skater Sonja Henie and U.S. swimmers Buster Crabbe and Johnny Weissmuller.

"Once upon a time studios would find these beautiful creatures and put them in movies," Hollywood publicity guru Tony Angellotti said. "And if someone isn't that facile with the English language, like Weissmuller, well, you just make him Tarzan."

In the modern age, the path is far more checkered for athletes looking to cross over. Retton has done a host of walk-on parts as herself in movies or shows such as "The Naked Gun" and "Baywatch," but attempts at larger casting have been tricky -- just ask anyone who saw Jenner in "Can't Stop the Music" or the near-Olympian Kurt Thomas in "Gymkata."

I think it's obvious that just having that "celebrity" as an Olympian is not enough, there has to be some sort of skill in order to develop a long-lasting career that's taken seriously. Both Entertainment Weekly and The Hollywood Reporter do mention the ability nowadays for stars to do reality shows, like Dancing With the Stars. That category opens a whole new venue for athletes who want to stay in the public eye after their Olympic days are over. Look how well it's worked for Kristi Yamaguchi!