I promised a recap of the Michael Weiss Foundation show. We've all probably seen exhibitions either on television or live, so I'm not going to recap every moment, but I will let you know some of the more interesting parts. Since I didn't have to pay for the VIP pass (as I was press), I tried to be very respectful of all the other people trying to get autographs and pictures, and I kept the interviews very short. I didn't get to ask too many juicy questions, but it was still great to get a chance to talk with some of the skaters. So read on to find out about the show, see some pictures, and hear some interviews.

The show started with some up and comers and recipients of Michael Weiss Foundation scholarships. I wrote about Grand Prix Gold Medalist and Silver Spring, Maryland native Kristine Musademba earlier. I got a chance to meet her and interview her at the post-show reception, where I asked how she felt skating with all the big names, and what winning the foundation scholarship means to her.

I also wanted to be sure and tell you about scholarship winner Ellie Kawamura. She's a Junior Grand Prix alternate, and she was great, I can see her jumping up to seniors very soon. She skated to "I Want Candy," and had a lot of presence on the ice, not like she was just going through the motions, but she really wanted to connect with the audience during the exhibition. I think she's friends with Mirai Nagasu; the two spent much of the reception laughing with each other (after Mirai spent time signing autographs after the show).

I have to say, exhibitions are for letting loose, and I've always been a big fan of skaters in the Scott Hamilton tradition who just go for it with their exhibitions and pick something they could NEVER skate to in competition. As much as the emotional slow numbers are lovely (and I always appreciate the skating), I really love a fun act. In that vein, Michael Weiss and Jeffrey Buttle delivered for me.

Let's start with Buttle. The 2008 World Champion skated to "Personal Jesus" by Depeche Mode, which I think was a pretty rock star move. And he sold it. I really liked watching him up close – seeing how he connects with specific people in the audience. All of the top skaters have a speed on the ice that the younger skaters are still trying to grasp, and Buttle was no different, he flew. Seeing his footwork and spins up close gave me a newfound appreciation for his abilities.

When I got a chance to meet him, one of the questions I asked him was whether he was feeling the pressure this year of having to defend his world title. I followed up by asking how excited he is that the Olympics are going to be in Canada in a few years.

Michael Weiss skated to a number he's done in "Stars on Ice" before, "Save a Horse, Ride a Cowboy," but the

fact that I'd seen it before didn't matter for me. I'm a sucker for that song and it always gets the house energized. He threw in a backflip for good measure (although I really wanted a tornado!), and he performed the best jumps of the night (in my opinion), which was great, since the other jumping was fairly unimpressive for the most part.

The faux pas of the night, which was kind of hilarious, was Sasha Cohen and Brian Boitano both skating to "Imagine," and skating one right after another. I'm not sure if this is on par with wearing the same dress as someone else or something of that nature, but it was quite funny for the audience. I think most of us thought it was a mistake at first and then we all realized that yes, Brian was indeed skating to the same song we had just heard.

Unfortunately, I spazzed and Boitano's interview didn't record, but I should say he was absolutely one of the most fun interviews I've had. He was funny and friendly, and I'm really sorry that I didn't get it on tape because he was also very touching. I asked him about the music snafu, and he jokingly blamed Weiss for not providing them a song list beforehand, but then he admitted he had another song he could have skated to if he'd wanted to, but he said he wanted to skate to "Imagine," so he did. Hey, the man's earned the right to skate to whatever he wants, I guess!

He also was very sweet when he talked about skating with this particular group of skaters. It seems that many of them are quite close. Boitano said it was important to be around people who were such good friends and so supportive, because he didn't have that for a lot of years in skating. 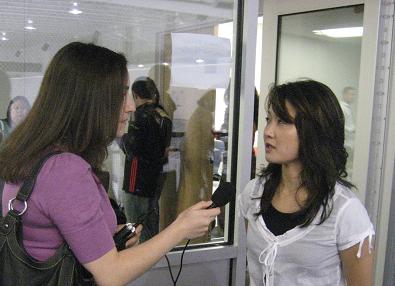 Yuka Sato, who, by the way, is even more beautiful in person than on television, told us how excited she was to see her friends again.

She was also happy to help Weiss with the cause.

Sasha Cohen also performed in the show. I don't think I'd ever seen Cohen skate in person, so it was very exciting for me to watch her. She was absolutely gorgeous, as expected. I could honestly watch her skate for hours, especially to beautiful music like "Imagine."

Cohen was not as receptive 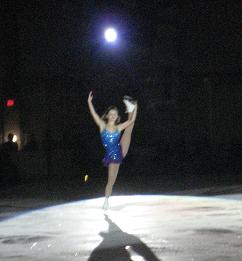 to the Required Elements interview as the other skaters. She declined the interview initially, saying she was supposed to take pictures with all the fans first and maybe we could talk later. I understood that the event was for the kids and the fans; I made sure not to bother anyone while they were signing and waited my turn to ask them questions (most of my interviews were very quick anyway, about a minute and a half long). However, as time went on and I saw Cohen chatting (rather than coming over to talk), I was worried that I wouldn't get the interview. Being the unrelenting reporter that I am, I couldn't let her leave without asking her one more time. She graciously granted us a moment. Unfortunately, she had to leave in the middle of the second question because the skaters were getting ready to go. Oh, well. I was proud of my persistence and pretty excited to get anything. 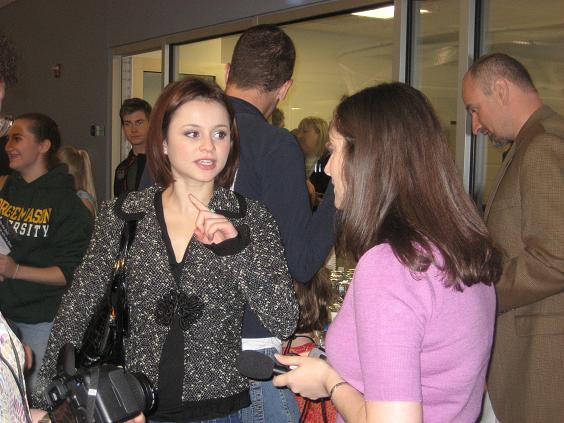 She tried to escape us... 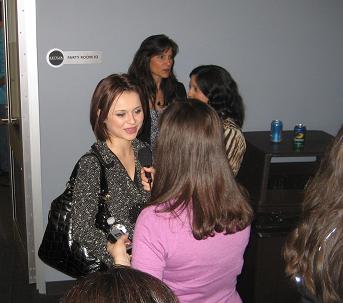 Here is what Sasha had to say about skating in the show. I also asked her about the "same song" situation.

Todd Eldredge was also there, and he showed off some of his trademark footwork during his program. I was worried since his song was so slow that he might not, but when he did I was quite excited. I asked him if he wanted to skate in the Japan Open or a similar competition again this year (Eldredge has been skating in the event the past couple of years, which allows him to compete under the new code of points. He also told us what it's like to skate under the current code of points. And finally, he told us how it felt to be involved in the show.

I also wanted to add a few snippets from my interview with Michael Weiss. I asked him if the organization had truly earned $80,000 from the show, like had been mentioned earlier during the performances.

Weiss also wanted to say how grateful he was that so many people showed up, despite the weather.

I would have liked to have asked the skaters a lot more questions but I knew that I had to ask just a few since the reception was for people who had bought VIP tickets and I was lucky enough to snag my pass. For that I want to thank Lisa Weiss, as well as Michael for being so gracious, and congratulate them and the rest of the foundation on putting on a great show!

I will hopefully be able to direct you to a slideshow with more pictures and some short videos at some point (still trying to figure out all this multimedia blog stuff!).

UPDATE: Here is a link to Figure Skating Universe, where someone has posted absolutely beautiful photos from the event. And here is a link to the IceNetwork article on the show.