Vote for Figure Skating! And Hope NBC Gets a Clue

Share All sharing options for: Vote for Figure Skating! And Hope NBC Gets a Clue

Here is an NBC Vancouver 2010 site where you can vote for the sport you're looking forward to seeing in the Vancouver 2010 Games. I was tipped off by Figure Skating Universe. Vote for figure skating!

Also, the article picks Mao Asada as "one to watch," yet puts a picture up of Yukari Nakano. I'm going to go ahead and say it's pretty bad that they couldn't get the picture right...I hope they change it soon but doubt they will. I hope they hire someone for their Olympic team who actually knows the difference between the skaters. Maybe someone with a blog. (HINT, HINT!).

Because I'm so helpful, I've put up an image of Asada (with the medal) and an image of Nakano to help NBC out. They look nothing. alike. 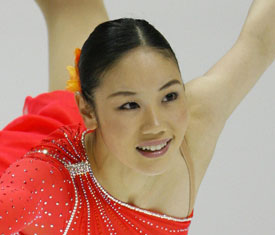