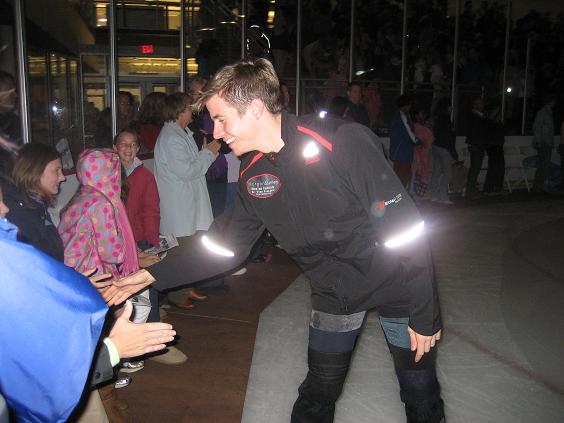 What does World Champion Jeffrey Buttle's retirement mean for figure skating in general and Canadian skating in specific? Let’s start with the little picture, by taking a look at Buttle.

What exactly does this mean for Jeffrey Buttle? I chronicled my shock the other day, and I have to say, after reading about what an amazing training summer of training Buttle's had, I haven't changed my stance. I can see that the moment of winning what you’ve always dreamed about may be anti-climactic, when something you've essentially worked for your entire life is yours and you just shrug and say…what's next? I'm wondering if being the world champ really was enough for him professionally, or if it just wasn’t all it's cracked up to be. I cannot imagine that Buttle isn't going to be doing something for Skate Canada or broadcasting for the CBC two years for now at the Vancouver Olympics and completely regret his decision. Not with the way he's been skating. But that is just my speculation, perhaps I’ve been jaded by watching Brett Favre and Lance Armstrong. And Michael Jordan. It just seems like when competitive people quit while they’re still viable, they get that itch again. I really respect Buttle for retiring while he’s on top though, that’s something a lot of people don’t have the strength to do.

What does this mean for Patrick Chan, Canada’s other well-known mens skater? This has to be good news for Patrick Chan, professionally speaking. I mean, I think he truly "arrived" last season – enough that he surprised everyone by beating Buttle at the Canadian nationals and he had the rest of the world paying attention to him when he finished 9th place at worlds. Not every 9th place finisher gets television time, but Chan did because he was like a breath of fresh air. He's very young, but who knows, maybe that means he'll be peaking at just the right time at the 2010 Olympics. He's from a country where everyday people tend to know the names of the famous figure skaters, so he’ll have that on his side, and now his greatest domestic rival has put away his skates. However, it’s clear from this CBC interview that Canadians are already turning their attentions toward Chan, and that Chan already feels it.

"I just have to take responsibility and be more responsible," Chan told reporters Thursday in Vancouver, site of the ISU Four Continents from Feb. 2-8, 2009. "I have to be a role model, like he [Buttle] was."

That was a lot of responsibilities for one sentence. I hope Chan can handle the pressure because I am really looking forward to watching him skate this season.

For figure skating in general, I've got to think this is a rough blow. Jeffrey Buttle embraced the new code of points, and he embodied them. They played to his strengths, and he made the sport look good. He showed the potential of performing a great program under this code of points, when a lot of people criticize the code for taking away artistry from the sport. However, his presence was also a reminder that maybe the code doesn't award dare-devilry quite as much as some would have hoped. Enter Brian Joubert, Stephane Lambiel, and Daisake Takahashi, three top skaters with consistent quads in their portfolios. And Joubert was quite vocal about his disdain over the fact that Buttle didn't even attempt a quad at last year’s worlds. So you’ve got to think maybe the quad will have a resurgence this year, since it’s likely the world champion will be an accomplished quad jumper.

And outside of the competitors and the judges, the fans are surely going to lose out with the loss of Buttle on the skating scene, but I'm sure he'll be skating in "Stars on Ice" and in exhibitions for years to come, so at least we'll still be able to see him, just not in the competitive form. He’s a strong performer and I hope he’ll stick around because even if that competitive fire is gone, he’s still got a lot to offer audiences as a skater.