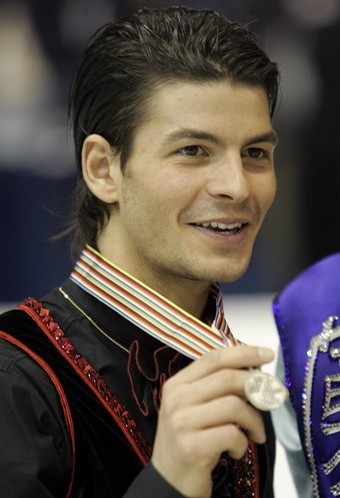 Two-time figure skating World Champion Stephane Lambiel from Switzerland is injured and may miss his first Grand Prix event of the season, Skate Canada, which takes place this November.

Per the Globe and Mail:

The Swiss skater sustained an injury to the abductor muscle of his left leg during the world figure skating championships in Gothenburg, Sweden, where he finished fifth behind Jeffrey Buttle and underwent physiotheraphy.

Buttle's first competition of the season was to have been Skate Canada as well, but he announced his retirement from Olympic eligible competition last week.

Lambiel, who is also the Olympic silver medalist, had switched coaches for this season and was training in the United States with Galina Zmievskaia, who also coaches world bronze medalist Johnny Weir. However, as the pace of his training increased, Lambiel felt pain in his leg and returned to Europe for treatment. He is now being treated by a team of German sports specialists, according to his official website.

The article says Lambiel skated in a skating show in Japan last weekend, but scaled down his jumps. I'm all for the "show must go on" but geez, get well so you can compete!!!

I believe the story was actually broken on Stephane's own website. Here is an excerpt:

Unfortunately, Stéphane's preparation is running very late for this season. The injury has prevented him from focusing entirely on training, which he had intended to do this summer. The choreography of his programmes is yet to be finished as well. Although he really hopes to be ready for the Grand Prix, his participation is still uncertain.

I hope he has a speedy recovery - I'm really looking forward to seeing him, especially with the coaching switch. Sounds like he should be back in time for Worlds, just maybe not in time for the start of the Grand Prix events.