Share All sharing options for: The New Ashley Wagner? 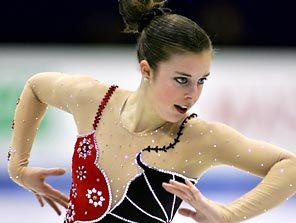 Here's an article from Golden Skate about last year's National Bronze Medalist Ashley Wagner. The article discusses Wagner's coaching switch from Shirley Hughes to Johnny Weir's former coach, Priscilla Hill. One of the reasons for the change was that Wagner was not getting full marks on her jumps and needed some technical help.

Hill was eager to take on Wagner, but knew that there were some things that they needed to work on. "We've gone back to the drawing board on a few things," said Hill. "I let Ashley know what I think needs to be better and how to address them. It is a process that it evolving." "The lutz was the first issue that Priscilla and I approached," added Wagner.

"We have been working on Ashley's stroking, speed, and overall maturity level," Hill continued. "Our goal is to present Ashley as a real polished senior lady who skates to the music, as opposed to a skater who has music playing while she skates."

Wagner has already competed in two club competitions this season and she won both. She hopes to make the 2010 Olympic team. The article also says that Wagner has been working with Olympian Irina Romanova, which has helped give her a new look on the ice. We'll be able to see the new Wagner in November at the Cup of China and also at the NHK Trophy competition in Japan.