Gimme a Head of Hair

Share All sharing options for: Gimme a Head of Hair 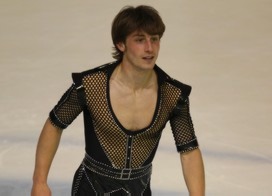 Is it all in the hair for Brian Joubert? Hey, that rhymed! I'm getting good.

Um, anyway, Icenetwork has an article about Joubert debuting his new programs at the French Masters in Orleans. One of the most noticeable changes Joubert has made this season has been to grow his hair out.

At first glance you can see that Brian has changed. First, his hair is longer than last season.

"This is my choreographer's idea," said Joubert. "Actually I like it, so here is my new look, he confirmed with a smile."

Remind me to do a post in the near future comparing results of long-haired male skaters with short-haired ones. It's a survey that's time has come, I think.

There is a more substantial change in Joubert that the article references; his choreography. As we blogged awhile back, Joubert has moved from World Champion Kurt Browning to working on choreography with two-time Olympic Gold Medalist Evgeni Platov.

"Evgeni is very different from Kurt, actually," explained Joubert. "I worked very well with him also. What I liked was that I had a say in the choreographical choices we were making. So, I involved myself much more into those two programs than I ever did. I feel good with them. Now it will be important to hear the judges' comments, here in France and at the international level."

The article also reports some troubles Joubert has been having with his quads since having his blades sharpened. However, the article does seem to assert that some observers think the problem may be in Joubert's head. I guess we'll see where his head is soon enough. One thing we know for sure is that it will be covered in more hair than we're used to.

UPDATE! I did not mention that Joubert was BEATEN by Alban Preaubert who won the free program at Orleans and the competition. I believe Joubert blamed the blade problem. We'll see if he can fix whatever's gone wrong...