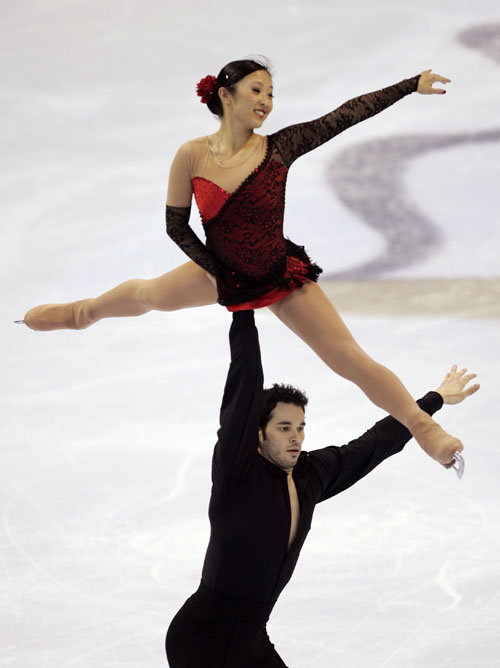 Naomi Nari Nam, who wowed the U.S. Figure Skating world with a second place finish at Nationals in 1999, but was never able to recreate that singles success, has retired from competitive skating, according to IceNetwork. Nam has been competing on the pairs circuit with partner Themistocle Leftheris for the past few years, finishing as high as third place in the 2007 Nationals. She had a second hip surgery last year but continuing skating would risk damage to her hip.

Nam's career always made me sad. I think everyone had such high hopes for her when she burst onto the seniors scene in 1999 (the same competition where Sasha Cohen made a name for herself as well, winning bronze oops, Sasha didn't make it big til the next year, thanks Aaron). I'm glad Nam was able to have somewhat of a resurgence in pairs skating over the past few years. She's a beautiful skater.

"I would like to thank U.S. Figure Skating for all its assistance, my former coach John Nicks, and all those that have helped me along the way," Nam said. "I would especially like to thank Peter Oppegard for all his efforts on my behalf. His dedication to me and belief in me helped motivate my successful return to figure skating. Lastly, I want to thank my biggest fans, my parents, who taught me to be the best I can be at whatever I choose to do in life.

"Skating has been a wonderful part of my life for as long as I can remember. It has afforded me opportunities for travel and a venue to perform for supportive audiences around the world. I am lucky to have fans that have always encouraged my efforts on the ice throughout the years."