Share All sharing options for: Skate America Preview and Predictions 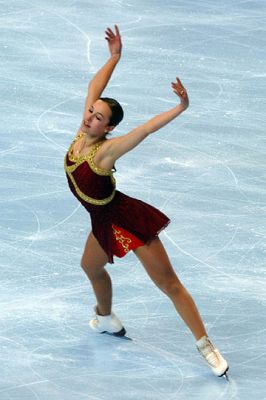 I have decided to join in and give an overview of what to watch for at this week's Skate America competition taking place in Everett, Washington (I use the term "watch" loosely; unless you have IceNetwork, you are only going to be able to see some of the men's free skate and some of the ladies short programs and free skates on NBC). It's the first senior Grand Prix event of the season and I've very excited to have this season get underway after all the action in the offseason (coaching switches, moves, retirements!). I wonder if Skate America can compete with all of the off-the-ice drama?

Judging from some of the brackets, it is definitely going to try!

Rematch of America's favorite skating rivals, World Bronze Medalist Johnny Weir vs. 2008 U.S. National Champion (on a technicality) Evan Lysacek. Can't wait for the NBC montage - will Johnny be wearing a pashmina or a boa? Will they force the skaters into an ever-so-awkward double interview? But, more importantly, Weir is hoping to continue his 2007-2008 resurgence while Lysacek is on his own "renewed love of the sport" tour after an injury kept him out of the 2008 World Championships. Lysacek worked with Tatiana Tarasova in the offseason and everyone wants to see how that and his ballet training will affect his skating.

Keep an Eye out for:

Explainer: I am going to guess that Lysacek's new style is still...well, new for him, and that he's still working it out. So Weir, who has been working with the same coaching team for a year now, will take the crown. But Weir isn't used to starting his Grand Prix season this early (he prefers Cup of Russia), so we'll see how that affects him.

U.S. Champs and Olympic Silver Medalists Tanith Belbin and Ben Agosto are trying to complete a comeback of their own after a mistake (and, apparently, general malaise) led to a disappointing fourth place finish in last season's world championships. They switched coaches and moved east to Aston, Pennsylvania. Keep an eye on them to see if they truly are "back."

Why Else to Watch:

Isabelle Delobel and Olivier Schoenfelder, reigning world champions from France! They were overshadowed by Belbin and Agosto (at least in the American media) going into worlds last year and came out on top. But it took the pair (who have been together since 1990) a bit of time after winning worlds before deciding to continue on through 2010. Now that they've made the commitment, they surely aim to defend their world title.

Keep an Eye out for:

Explainer: If Belbin and Agosto have been working on their form and the basics, as reported, then (barring any errors) they should best Delobel and Schoenfelder. However, a newfound confidence for the French skaters could lift them over the competition.

Kerr and Kerr should win the bronze but I am going to be watching Carron and Jost as well...

Germans Aliona Savchenko and Robin Szolkowy embark on the defense of their world title. A relatively quiet offseason means this pair probably had time to just get down to business. They recently won the Nebelhorn Trophy to start the season off with a victory.

Keep and Eye out for:

Current U.S. Silver Medalists Rena Inoue and John Baldwin, who sat out the Grand Prix last year but have won this event in the past.

The American skating eyes are no doubt on Kimmie Meissner, to see if her coaching switch has improved her confidence and skating. But I also see this as something of a Grand Prix coming out party for Mirai Nagasu and Rachael Flatt, who are sure to be contenders at next year's national championships for spots on the 2010 Olympic team.

Why Else to Watch:

Japan's Miki Ando is competing after having to pull out of the 2008 worlds with an injury. We'll see how this former world champion bounces back. And two-time Grand Prix Champ Yu-Na Kim of Korea is hard to bet against in these events.

Explainer: Bronze was tough for me; I see a lot of confidence in Flatt's skating but it could easily go to nearly anyone else in the competition - this field is very impressive.