Biggest Surprise: Takahiko Kozuka pulling out the upset in the men's event. Even more of a surprise because a lot of people watching can't explain why he won (including this blogger).

Best Performance: For me it's a tie between McLaughlin and Brubaker's flawed yet fantastic West Side Story free skate that launched them into second place in the pairs competition, and Kerr and Kerr's original dance.

Worst Performance: Sorry to get so negative, but a tie here between Mukhortova and Trankov's free skate and Inoue and Baldwin's free skate. I know there may have been worse skates but I didn't expect these two pairs to implode quite so completely.

Person we had to read about having gained confidence all off-season who actually looked like he or she gained confidence: I will give this one to Evan Lysacek. And I guess now we'll have a moratorium on the Kimmie Meissner renewed confidence stories, at least until after she performs well in a competition.

Now, onto the fashion!

Most egregious use of feathers: Maria Mukhortova. It looks like a bird swallowed her up to the neck. And I want to congratulate her because I was sure Tanith Belbin had this category sewn up, but Mukhortova is going to be hard to beat. 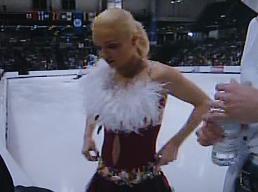 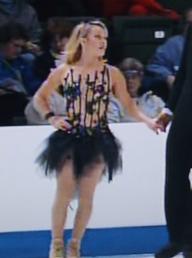 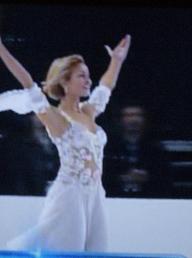 Cutest war-themed outfit: Isabelle Delobel's Red Cross inspired outfit. I'm not sure if they really wore short shorts to aid the wounded but this outfit is supercute.

Best gaudy headpiece: Jane Summersett. It was sparkly, had netting, sequins, and a flower that reminded me of "Blossom." Can't ask for much more than that in a hat. 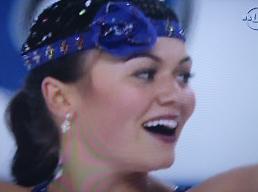 Proof that Aliona Savchenko is trying for Xanadu the Musical after her ice skating career is over: 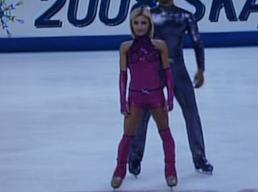 Leg warmers, fingerless gloves, hot pants...the color fuschia...this is one of the greatest outfits put on the ice.

I would also like to congratulate the recent graduates of the Johnny Weir School of Costuming:

Adam "Every boy wants to be a stained glass window when he grows up" Rippon: 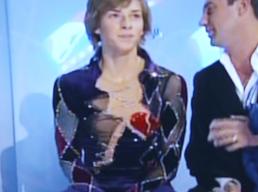 and Kevin "Water me, please" Reynolds: 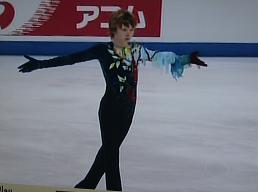 And so we end on a positive note, the best dressed award goes to Kimmie Meissner:

The color, the makeup, the hair -- she looked absolutely radiant. 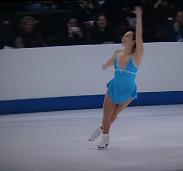