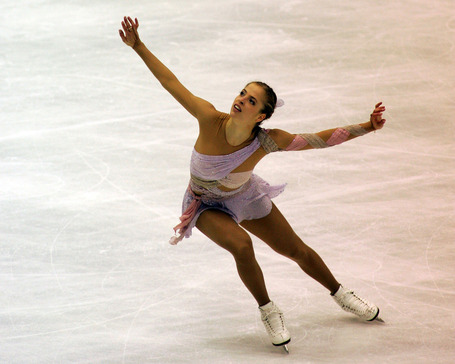 I have the luxury of already knowing the results, and so I will start with Elene Gedevanisvili.

Elene Gedevanishvili (Georgia, music:  Phantom of the Opera):  Gedevanishvili's outfit is questionable.  Mostly because she plucked it from my eight-year-old closet.  Triple lutz/double toe...another nice combo...shaky spiral into a double axel double toe.  Pretty spins.  Triple salchow and a better spiral...the type where you flash the audience.  Hand down on the next triple.  DOuble axel.  Interesting spin position but may need more work.  Footwork sequence...she seems a bit tired now.  She stopped before the music.  That was actually a very good performance - one major mistake and some grade of execution nitpicks, I assume.  97.01 for the free, 141.52 overall.  First place.

Mao Asada (Japan, music: Lieberstraum):  Mao is in a very sequined lavender number.  I like seeing her back in the light colors even though this outfit is quite busy.  Has no speed going into triple axel and pops it.  Falls on next triple.  Lovely spread eagle.  pops triple lutz.  YIKES.  Disaster.  Her spins are wonderful.  Double axel.  Falls on another triple flip.  argh, poor poor girl.  Oh, but she has such a beautiful spiral.  Triple salchow appears two-footed.  It's hard to judge either of her programs here because they were so disastrous and her head is not in the game.  85.45 for the free skate and 133.40 for the whole shebang, overall 2nd.

Jenna McCorkell (UK, music:  Voice of Violin, Allegro for Strings):  This costume is just too much.  Why not something a bit more simple?   Interesting entry to triple lutz but she puts a hand down after turning out on the landing.  Falls on triple flip.  Tries a unique sit spin arm position.  She looks tired and slow right now.  Spread eagle and catchfoot spiral are not too exciting.  Doubles her loop.  Another double.  Holds onto her combination.  Double axel is fine.  So she's landed some jumps...but not inspiring.  Interesting spin positions here.  Footwork.  I like the footwork music.  She is trying to sell it but she is super tired.  72.45 for the free skate, 121.52 overall.  5th place.

Caroline Zhang (US, Allegro Cello Concerto B Minor):  Triple flip/triple toe.  She'll lose some GOE, but good for her...unless it was underrotated!  Can't complete her triple lutz.  She is just a different presence on the ice than she used to be.  Pops her triple salchow.  Inside edge on the catchfoot spin, very nice.  Triple loop is fine.  Spiral has nice extension but is not solid like it used to be.  Pops triple flip.  Basically stops skating for a second.  Ack.  Another triple loop with some landing issues but at least she landed it.  This footwork should have more speed...she is barely moving down the ice.  Sighhhhh.  One last jump...double axel, she holds it.  A nice layback...very pretty.  Biellmann, still no pearl.  No, this will not do.  83.15 for the free skate, 133.86 overall.  Second for now.

Kiira Korpi (Finland, music:  Evita):  Korpi has dug out the tie-dyed outfit for this performance.  If you did not know, tie-dying was HUGE among Argentinians during the Peron years.  Very big.  Triple toe/double toe, finely done.  Triple lutz appeared two footed and possibly underrotated, but she got the double toe on the end.  Lots of hugging herself during this performance.  She is lonely.  Triple loop.  Pops a triple flip.  Korpi's spiral is nothing to write home about.  A little shaky.  I love Evita so I am distracted.  I don't even know waht jump she just tried but she popped.  Triple loop, double toe, double..toe?  Working the crowd on this footwork.  Not very difficult looking nor is it very fast.  Forward on the double axel.  Nice layback spin combo here.  Some knee bending issues on the camel into sit spin.  That was...not great.  But that seems to be the way things are going here today.  95.84 for the free skate, 148.44 overall.  First for now.

Ashley Wagner (USA, music:  Malaguena):  Ooh, will Ashley have her Kristi Yamaguchi moment?  It doesn't sound like she will, based on the results.  Not loving this opening.  First triple has a choppy landing, as does the double ont he end of it.  Double axel/double toe...maybe two-footed (apparently, that was actually an underrotated triple toe)?  She wants everyone to clap.  They are not really...nice triple here, but apparently it was the wrong edge...Nice layback but no speed by the Biellmann which seems cut off.  Catchfoot spiral is ok.  Sit spin is nice.  The end of this section is so weird - she basically has no choreography and just stands there while the music goes crazy.  Not getting that.  Fall on the triple loop...oh, this is too bad.  Triple salchow - again something off on the landing, maybe two-footed?  Another triple loop and combo, aparently underrotated.  It must be my computer because these jumps are looking two-footed.  Another triple.  Footwork sequence.  I would love some more speed and a little more crispness...after all the music is so dramatic.  Very slow at the end of the footwork.  Final spin.  A bit of a bobble before the last camel.  Last Biellmann is better than earlier one.  Wagner does not look happy.  Neither does Priscilla Hill.  90.80 for the free skate and 143.73 overall. Second place for now.

Rachael Flatt (USA, music:  Slaughter on Tenth Avenue):  Very pretty costume, although I would like another strap.  Double axel/triple toe to start.  Spread eagle is nice.  Triple lutz/double toe.  These facial expressions are a bit much, heh.  Not the prettiest spin you'll see today.  She is definitely playing the part here but it's a bit cutesy.  Triple flip is nice.  Spiral is pretty solid.  That is what I look for nowadays.  She stumbles out of the landing on her next jump.  (underrotated) Triple flip three jump combo. (underrotated)  Cutesy style for the footwork.  I like it but it's also kind of like...she is pretty much doing the exact same thing for her short program.  Spread eagle...Triple salchow.  Not a perfect performance but probably the best showing yet today...and not by a small amount.  107.35 for the free skate, 161.04 overall, first for now.

Kanako Murakami (Japan, music:  The Mask of Zorro):  This costume...I don't even know.  I think she is playing both Zorro and Catherine Zeta Jones at the same time.  Wow, I need an aspirin.  Triple toe/triple toe, thank you again, Kanako!    Some spinnings going on here.She falls.  Layback...not fab.  Biellmann.  She's making some weird faces.  I like that she appears to have a lot of speed.  She has a high leg on that lutz.  Another fall, this time on the triple loop.  Double axel.  Three jump combination.  Wow, it says a lot about the competition that this girl goes onto medal.  Like the footwork here....lots going on.  94.06 for the free, 150.16 overall.  Second place for now.

Carolina Kostner (Italy):  And they open with a boob shot.  Wow.  Triple toe - very nice.  Double axel.  Flops out of her second double axel landing.  That is how all of my landings would look if i were a skater.  Triple salchow.. Triple loop, double toe loop (underrotated).  Spirals...ok, not great.  She has done better.  Triple sal/double toe.  107.34 free, 164.61 overall.  She wins.

It's possible my favorite performance of the night was from Elene Gedevanishvili.  Too bad her short program left so far from the medal stand.

For the record, here are the numbers of fully-rotated triples (without falls) for the ladies recorded in this post in their free skates (taken from the protocols):