Share All sharing options for: Skate America Previews and Predictions 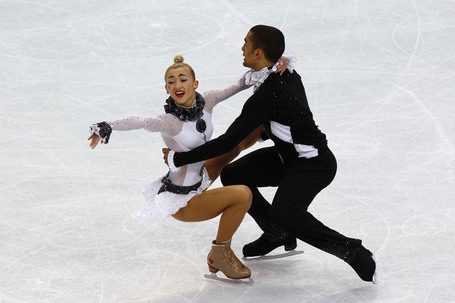 The Grand Prix Series continues this weekend in Portland, Oregon with Skate America.  Here are some thoughts on the upcoming competition.

Why to Watch:  Germany's Aliona Savchenko and Robin Szolkowy dominated pairs competition for two seasons, until Olympic season when things seemed to fall apart.  Considering their skills and program components capabilities, they should easily win this competition unless they fall apart.

Keep an Eye Out For:  The other medals here are theoretically up for grabs.  I assume Chinese wunderkinds Sui and Han may be able to grab the silver even if they make a lot of mistakes as they did last week since they will score high for their technical tricks.  I wonder if they're able to keep up their amazing energy just one week after wowing the world at Cup of China and traveling all the way to the U.S.  In my opinion, Americans Denney and Barrett really need to medal here.  They came in seventh at the world championships last season, and they should be able to win a Grand Prix medal at this point.  For them, I think the key is to rock the short program...I don't see them gaining ground in the free skate unless other pairs implode.  I am also watching out for Marissa Castelli and Simon Schnapir of the U.S. to see if they can put together two strong programs.  And Canada's Kirsten Moore-Towers and Dylan Moscovitch could very well add another medal to their Skate Canada silver with their oh-so-watchable Les Miserables free skate.

Why to Watch:  This is a great chance to watch two of Japan's best male skaters go head-to-head in world champion Daisuke Takahashi and Skate Canada silver medalist Nobunari Oda.  I don't think Oda will hold up to Takahashi on choreography, performance, and the other components...but he has some great jumps, so if Takahashi has falls there is definitely a chance for him to win.  And don't forget the Skate Canada bronze medalist Adam Rippon.  Many think he deserved a little better at that competition.  If he skates that well here, it should be enough to medal again.

Keep an Eye Out For:  Kazakhstan's Denis Ten will be looking to make up for his miserable 12th place performance at NHK Trophy.  And world junior silver medalist Nan Song of China will be making his Grand Prix debut.  Shawn Sawyer of Canada was a surprise silver medalist here last season so let's see if he can do it again.

Why to Watch:  America's Davis and White have edited their waltz short program as well as their tango free dance, which I imagine will be a good thing.  They debut it here.  They have some actual competition here with Skate Canada champs (from Canada) Crone and Poirier.  Likable as Crone and Poirier's free dance to Eleanor Rigby is, I don't think they should be able to challenge Davis and White here.

Keep an Eye Out For:  Canada's Weaver and Poje, who have already come in second to Davis and White once this season.  It will be more difficult for America's Shibutanis to make an impact here but they sure will try.

Why to Watch:  The NHK Trophy was so satisfying that we'd like to watch the entire podium go up against each other one more time?  Anyone?  Sighhhhh.  So.  Carolina Kostner of Italy, newly crowned NHK champ, does not have all her jumps due to injury.  Be that as it may, she has a pretty light load but will rack up the GOE and program components scores. Rachael Flatt really has to win this competition.  She should have won NHK and she needs to do what she can to make sure she wins this one.  If she cannot beat a watered-down Carolina Kostner, then she has no prayer of becoming a world medalist (unless everyone else becomes a human zamboni, which is actually not too much of a stretch). Flatt is reportedly trying out a triple lutz/triple loop combination here.  That should be impressive if she can pull it off.  I reallly want to see some more triple/triples from the ladies overall.

Keep an Eye Out For:  Kanako Murakami of Japan will be like an injection of sugar straight to your veins.  But I am hoping that if she falls apart in the free skate again that she won't be able to hold onto a medal because that wasn't great to watch in NHK.  Amelie Lacoste was the Skate Canada bronze medalist and she has the programs to get her on the podium depending on the circumstance.  Elene Gedevanishvili was third in the free skate at NHK so if she starts in a better position here and has a similar performance, perhaps she can sneak onto the podium as well.