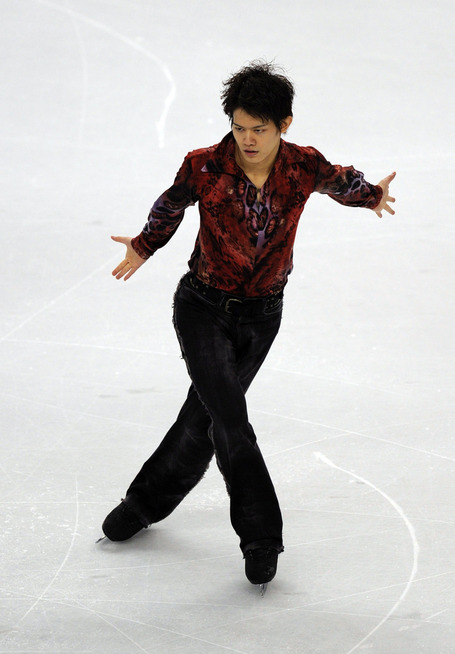 This is the final weekend of the Grand Prix country competitions.  There are a few Grand Prix Final spots that need to be solidified and a few skaters who still have something to prove.

Why to Watch:  Although Germany's Aliona Savchenko and Robin Szolkowy will likely easily walk away with this one, I'll be looking to see if The Pink Panther does it for me the second time I see it.  I will also be looking at Russians Vera Bazarova and Yuri Larionov to see if they can impress again and secure a spot in the finals.  A medal would likely do it for them.

Keep an Eye Out For:  This competition will be a chance for a relatively unheralded pair to come out and win the bronze medal, though they'll likely be far and away from the top couple of pairs in point totals.  My money is on Brodeur and Mattatall of Canada or Hausch and Wende of Germany since their personal bests are much higher than that of any of the other pairs competing, but it would be nice to see Felicia Zhang and Taylor Toth of the USA make some improvements here over their last Grand Prix.

Why to Watch:  We've got a couple of Americans anxiously awaiting the results of this competition to see if they will be knocked off the Grand Prix Final bubble.  I think Japan's Takahiko Kozuka should win this one.  If Brandon Mroz skates the way he did at Cup of China, he could take a coveted spot in the GPF as well.

Keep an Eye Out For:  Brian Joubert doesn't tend to perform his best in France but a win here could also secure him a spot in the finals depending on how Kozuka does.  Florent Amodio is a dark horse and I think he'd need a lot of errors by the other skaters in order to outright win.  Canada's Kevin Reynolds has impressive quads but he tends not to stay in the mix during the free skate.

Why to Watch:  Though this should be a rather easy win for the hometown team Nathalie Pechalat and Fabian Bourzat, there are plenty of other teams trying to secure a berth in the GPF.

Why to Watch:  See if Japan's Mao Asada is any further along in reworking her jumps.  Since it took so long to learn the jumps the wrong way in the first place, I would assume this entire year would be a rebuilding year for Asada (I mean, she essentially could not land anything at NHK).  But if Asada's competitive instincts have gotten the better of her, perhaps she'll abandon technique for medals here.  I am also interested to see if Alissa Czisny (one of the few female skaters I am looking forward to watching this season) can earn a spot in the GPF as well as somehow medal in two Grand Prix events in a season for the first time since 2005-2006.

Keep an Eye Out For:  This is truly anyone's competition based upon the past events.  Mirai Nagasu won the short program at Cup of China...if she could pull together two nice programs here she could edge almost anyone.  Kiira Korpi will get nice program components - can she land more than two triples in her free skate?  Cynthia Phaneuf won the short program at Skate Canada but bombed the free skate.  She has not medaled in a Grand Prix event since the 2004-2005 season no Grand Prix medals to her name but perhaps that changes this weekend.  And Japan's Haruka Imai impressed in the free skate at Skate Canada.  Can she have a more complete competition here?

*This is such a tough one. I changed it up three times. So many of the ladies have the potential to win this but their brains are rarely in the right place to skate a clean competition.  I am thinking this the wrong way to go for many reasons, but particularly because if Nagasu skates well enough to medal I have a feeling she would win. But I am going to give Czisny the edge for her beautiful program, what the heck...