Share All sharing options for: Let the Games Begin 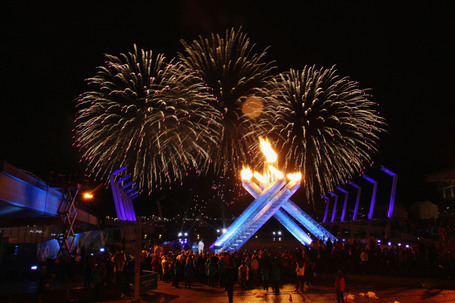 The XXI Winter Games began in Vancouver last night with the opening ceremonies.  There was a definitely a bittersweet or even subdued feeling after the tragic death of Georgian luger Nodar Kumaritashvili, killed on a training run yesterday. The Georgian delegation received a full standing ovation when they entered the stadium sporting black armbands in remembrance of their fallen teammate.  From the New York Times:

At first, there was speculation that the Georgians were considering pulling out of the Games. But the nation participated in the 2008 Beijing Olympics despite being at war with Russia, and it has remained in these Games so far, too. Their experience, though, is forever changed.

Vice President Joseph R. Biden Jr. reminded the American delegation of that before its athletes and coaches entered the stadium.

"This is a nation that has gone through an awful lot in the last three, four years," he said of Georgia. "It’s a small nation of five million people, and the pride they had in representing their country here at the Olympics, and now to suffer this loss is just tragic."

It's so terribly sad.

Some figure skaters held the ultimate honor last night of carrying their nation's flag into the games.  Among them:  Stephane Lambiel of Switzerland, Kevin Van der Perren of Belgium, Julia Sebestyen of Hungary, and Alexandra Zaretsky of Israel.

If you were watching on NBC last night, you were able to get several glimpses of American and other skaters.  The camera seemed to  particularly like Meryl Davis!  The ceremony included performances by such stars as KD Lang and Joni Mitchell, and NHL great Wayne Gretsky and NBA Star Steve Nash were among those who lit the torch.

Now, the games are officially underway, and the skating begins tomorrow with the pairs short program!  Check back later today for the full pairs preview.