I'll be updating as the competition unfolds; feel free to post your thoughts in the comments as we watch the men skate!

Florent Amodio (France, Music:  Munich soundtrack):  I've seen him do this short program just beautifully.  Nice triple axel...triple lutz, great, and triple salchow/triple toe.  Perfect!  What a nice start.  I love his skating quality in this program.  Look at how much he gets into it.  Nice spins. 75.35, that is a really nice score for Amodio.  Wow.  This will be a high scoring Olympics.  Well-deserved personal best.  I feel bad not having profiled him, I knew he could do this in the short but I wasn't sure he'd contend for a medal.  I guess we'll see if I was wrong!

Vaughan Chipeur (Canada, Music: Come on Baby by J. Satriani):  Oh, Chipeur.  Glittery man.  He has quite a hand from the crowd.  Darn it, bad landing on the triple axel.  Chipeur cannot control his jumps, so much energy.  nice triple flip/triple toe, and triple lutz.  These spins are fine.  He doesn't quite have the abilities to connect with the audience...oh crap he screwed up that footwork. It was choreographed by Kurt Browning.  Next up - The King.  57.22 for Chipeur, ugh. 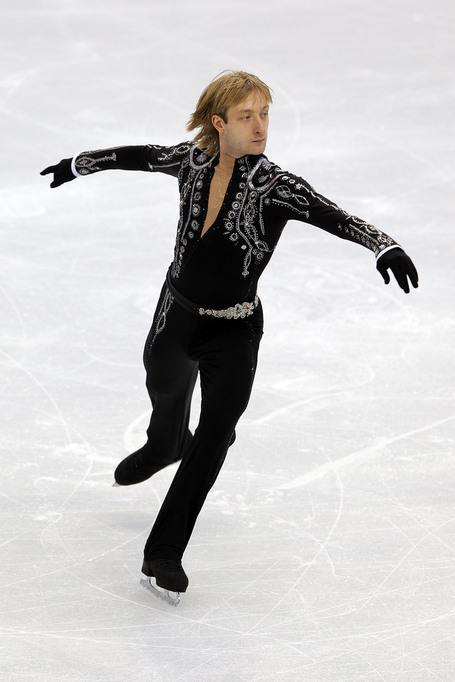 Evgeny Plushenko (Russia, Music: Concierto de Aranjuez):  Crazy hair?  Check.  NBC is going with "Yevgeny."  Some people are really into him in the crowd, lots of screaming.  He'll start when he's ready, dammit!  Quad toe/triple toe.  No speed necessary, he can land it in his sleep.  triple axel into footwork?  Child's play.  Triple lutz...little weird on the landing (but was never in doubt).  Very slow camel but the rest of the spins here are good.  Here comes the crazy arm waving.  He is making faces to the judges.  I don' t like this end footwork, I think it is kind of slow, but the spins are good.   I'm pretty sure we just saw the highest scoring short program of the games, if not a new record.  That's my guess.  This man is the real deal, he will not be denied.  90.85.  Yes, a big score.  But not a personal best or a record.  And I will point out that his "transitions" score was a point to two points lower than his other program components.  heh.  Button is on now, haha points out the "arms are flying all over the place."  Button doesn't like it.

Daisuke Takahashi (Japan, Music:  Eye by Coba):  Oh, snazzy new outift.  Also, Daisuke, you still haven't answered my emails asking who waxes your eyebrows.  Stop holding out on me!  Ugh, now I am nervous.  Of course Plushy is in the crowd.  Whether he skates clean or not, this was quite a comeback for Dice-K.  ACK SO SCARED on that triple flip but he held on.  YES triple axel.  Here are some transitions.  BAM triple lutz.   YAYYYY.!!!!  Here he sells it.  The footwork is as scary as the jumps because it looks so hard. This has to be the most difficult footwork here (sorry, Patrick and Stephane). I HEART DAISUKE.  His triple flip may not have been picture perfect but everything else was so lovely.  90.25!!!!!  SEcond place, but he is sooo close.  Wow. Transitions were higher than Plushy's.  I will not lie...I just screamed and clapped in my living room when I saw the score.

Stephane Lambiel (Switzerland, Music:  William Tell Overture):  I'm excited for this - the crowd will surely get into it.  Aw, so cute as the flag-bearer.  hate those nagging groin injuries.  This is an ambitious program.  Double axel...nice but so easy.  Loses point potential.  Quad toe - oohh...he really stopped the fall, so I'm impressed, but then doubled the toe off of it.  Augh.  Finished his last triple fine though.  Hopefully he rack up the points with the rest of this program.  Great spins of course.  ANd this footwork is so fun.  Another perfect spin from Lambiel.  84.63.  Still a very very good score...there's still a chance for him.  That score is a little bit high for me.

Nobunari Oda (Japan, Music:  Totentantz):  Triple axel, done.  Triple/triple combo,done.  Very difficult entrance into final jump, perfect.  Wow.  Sell it, Oda!  Good footwork here.  He is starting to look a little slow?  His personality comes out a lot more in the free skate and I can't wait!  Good spins, some positions we haven't seen much of.  I think he might be around Lambiel range.  oh, I was right - 84.85.

NBC's Patrick Chan up close and personal thought:  He is much more adorable to hear talk on tv than he is in print articles.

Brian Joubert (France, Music:  Rise by Safri Duo):  Joubert has reportedly been skating really well in practice, so we'll see if he can deliver.  I have a feeling his components will hold him back tonight.  He's coming  back from a foot injury and surgery from December.  Oh, the pelvic thrusts.  My eyes!  Quad toe/triple toe - turned out of it and didn't do the combo.  Not good.  Triple axel - much better.  Augh complete disaster on the triple lutz.  That's really sad, I don't know if he can make it back from all these mistakes.  Let's see if he can finish strong on this footwork.  He's doing a good job with it but he's just kind of subdued.  Whoa, what was that running?  I must have blocked that out if he's done it before.  Anyway, what a downer for him.  68.00 in tenth place.  Not a chance, that is completely devastating.

Takahiko Kozuka (Japan, Music:  Bold as Love by Jimi Hendrix):  I love his skating, but not this program.  NICE triple lutz/triple toe.  Argh, ugly landing on the triple axel.  Spins are ok.  It's hard to watch people spin after Lambiel has gone.  Nice triple flip!  Like the end spins better.  Footwork looks difficult, crowd is loving him!  He did really well, not perfect, but great.  Go Japan.  79.59.  Fifth place.

Samuel Contesti (Italy, Music: Wish Me Well by Whammer Jammer) I love these overalls.  You are ridiculous, Samuel! In a good way.  Just ok triple lutz/triple toe.  Here comes triple axel - wow he saved it.  Not pretty but landed.  auhhhhh he falls on the triple flip.  That was kind of threatening to happen with the other jumps.  But he's so cute in this program with the footwork and interacting with the crowd.  70.60

Patrick Chan (Canada, Music: Tango de los Exilados):  watch out, here is Canada's big gold medal hope.  The crowd will go WILD.  OMG talking about Chan's not needing a quad - DRINK!  Ergh turned out of triple axel like usual...I wonder if he'll lose points on Grade of execution.  Nice triple/triple combo.  Good triple flip.  well, here comes the awesome Chan footwork - he is so good at this.  Nice spins.  For some reason he is not winning me over the way Takahashi and Lambiel did.  I would definitely have him in third here because of that landing mistake.  UH OH he just slipped up on the footwork - did the judges catch that?  Also, he followed off the music.  Pang and Tong got dinged for that the other night in the pairs short.  This score should be interesting. Uhoh. 81.12 - not great for him considering the other scores.  He is fifth.  He did get a music deduction.

Johnny Weir (USA, Music: I love you, I hate you):  Rocking the corset as only he can.YES triple/triple combo - made it happen!!!  Come on, Johnny.  Triple axel - YES - was that all the way around?  Whatever, I Don't care, he did it.  Final triple - YES!! YAYY JOHNNY.  Now just work it.  Spin positions are great.  Footwork is so fun.  That's my number three program of the night so far, but I may be biased, heh.   Yeah, Johnny.  Awesome.  82.10.  Wow, the judges just aren't that into him.  That's pretty low for what he just did out there, but he doesn't have the strongest transitions, as Bezic points out.  It's true, I suppose.   Just compare his transitions to Jeremy Abbott's...and you can see the difference.  Still, I thought that was great.  There is speculation that he two-footed a jump.  I'd have to look at it in slo-mo..had no idea that was the case.

Kevin Van der Perren (Belgium, Music:  Night on Bald Mountain): has the skeletor suit in full force.  Ick!  Scott is saying he is a freaky spotter.  Interesting.  Triple axel...not perfect.  Triple lutz/triple toe - well done.  I don't really love to watch this skater.  His components will not be as high as the top guys tonight.  Announcers are explaining why his footwork isn't too hot. 72.90 - season's best.

Tomas Verner (Czech Republic, Music:  Zorba):  This is a cute crowd-pleasing performance.  Watch the quad.  AUGH he popped his quad.  Dang, Tomas@!!!  This program gets less cute when he errs, I admit.  And triple axel FAIL.  This is what he has been doing all year.  Just a disaster.  He held onto the triple lutz, but who cares at this point.  He will not be contending.

Evan Lysacek (USA, Music:  Firebird):  And here comes EVAN!!  He's got hose poofs on the shoulders and odd things on his gloves as usual.  He looks really...serious? Questioning?  Not really sure.  Anyway...here he goes.  YES TRIPLE AXEL.  And it was clean and full three and a half turns.  I think! hee.   Perfect triple/triple combo.  This man is on tonight!!!  triple flip - perfect.  Great footwork here.  So perfectly on the music.  Spins are fast and low.  Look at his face - he looks relieved.  AMAZING performance, my god - the best he's done it all year. And he's done it great all year.  What a moment.  Wow, he is tearing up. This is very emotional.  HE HAS TO be up there.  HOLY CRAP 90.30 - he is in SECOND place!!!  GREAT for him, personal best.  Oh my gosh, I would not have expected it to be this close.  Are the judges changing before our eyes??

Jeremy Abbott (USA, Music:  A Day in the Life):  Combo is clean but he is a little tight.  This program is beyond beautiful.  Triple axel - CRAP WHY DID YOU POP IT ABBOTT?  This is so devastating.  And he doubled his lutz.  Man this is all psyche.  So sad.  And it just makes me so sad to see the rest of this gorgeous gorgeous program.  I can't believe it.  He really does have it all - except maybe the ability to skate on the world's biggest stages.  I am absolutely heartbroken. 69.40.  ugh.

Michal Brezina (Czech Republic, Music: Puttin on the Ritz):  Wow, nice triple axel.  Great triple lutz, perfect triple flip/triple toe.  Wow, he really delivered!  He will just have to work on presentation.  He seems to be great at handling the pressure.  Program is not fabulous but it is cute.  78.80, not bad!

Did anyone expect for the top three guys to be less than a point away from each other?  How meticulous was Lysacek tonight - he really came through on his promise to maximize points.  Despite the various heartbreaks, this was an AMAZING night of skating.  So many amazing performances.