Share All sharing options for: Plusheko, Lysacek, and Takahashi Less Than a Point Apart After Men's Olympic Short Programs 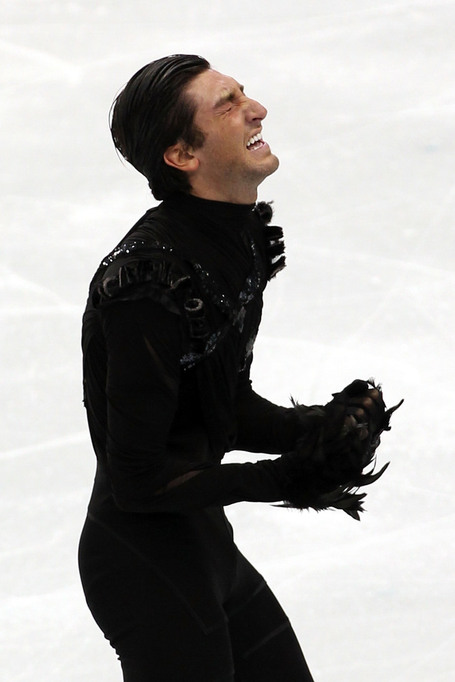 The Vancouver Winter Olympics men's short program just ended, and it delivered on every level.  The competition is a lot closer than I expected.  The gold medal favorite, Russia's Evgeny Plushenko, is in first place after a clean program, but the judges were not as generous with the presentation (program components) scores as they have been in past competitions.  He is followed by less than a point by America's Evan Lysacek, who put up a passionate and technically pristine short program, and Japan's Daisuke Takahashi, who also turned in a high energy and artistic performance.  Tonight, the judges showed that you really can be rewarded for having a great program.  Rounding out the top six (but several points back) are Japan's Nobunari Oda, Switzerland's Stephane Lambiel, and America's Johnny Weir.  I was actually surprised that Weir didn't receive a few more points - he appears to be one of the few skaters that the judges were not generous to! He really had an amazing crowd-pleasing performance and there were boos for his score.

Unfortunately, it was also a night of heartbreak.  America's national champ Jeremy Abbott completely imploded. He popped his triple axel and then doubled his lutz.  He is way back in 15th place, just a devastating performance.  And France's Brian Joubert is way down in 18th place.  He fell and missed his combo on his quad.  Canada's Patrick Chan had a turn out of his triple axel but still scored quite high, although it was not good enough to stay in the mix with this amazing field.

Lysacek was in tears after his performance.  His performance and Takahashi's performance won the night for me.  Plushenko was great as well, but it looks like he will definitely have to be clean to win, because the judges here are not as impressed with him as the European championships judges were.  Kind of refreshing to see the top three skaters scored that way.