Share All sharing options for: Additional Analysis of the Men's Olympic Competition 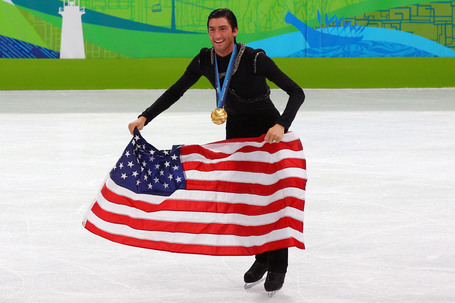 I still cannot believe that Evan Lysacek won the Olympic gold medal.  Congratulations to Evan Lysacek and the rest of the men for giving us such a great competition.  I doubt any of the other skating competitions will touch this drama.  Lysacek was on The Today Show this morning and I'll post the link later.

Why Evan Lysacek is Awesome

Evan Lysacek is awesome because he sees what he does wrong and he works to correct it.  I can't tell you how many skaters are aware of their major flaws, and acknowledge them and say they're working on them, and then of course you see no difference.  I know that technique and style are not easy things to change.  But somehow, Lysacek has managed to do it.  He was receiving grade of execution negatives on jumps, and he improved them.  He was receiving triple axel downgrades, and he has for the most part corrected that issue.  I know that NBC called him a hard worker so much that it became a cliche, but I appreciate what he's done.  I saw it last season when it appeared that the judges had written him off at the start of the season in favor of newbies like Patrick Chan and Takahiko Kozuka, and then he came back and got stronger and won the world championships.  And he continued that momentum through the whole year.  How he was able to save his two best performances for the Olympics, I have no idea, but it was masterful planning and training.

Looking at the quality of Lysacek's jumps (with the exception of the second triple axel, which had a very forward landing), I see how he made up the points from Plushenko's quad easily on grade of execution; Plushenko's jumps were sloppy.  Still, I think the scores were closer than expected when you really look at the two programs.  The fact that Plushenko's program components were so similar to Lysacek's is somewhat of a joke...the judges regressed back to their old ways.  Plushy's program was hokey and not in the same league as Lysacek or Takahashi's, although he performed the heck out of it and did deserve credit for that.

Frank Carroll is one of the all-time great figure skating coaches.  He's coached Michelle Kwan, Linda Fratienne, Tim Goebel, and so many others.  But he never got his Olympic gold medal until last night.  What a sweet moment.

I can't say how awesome I find it that Johnny Weir brought his two strongest performances of the year to the Olympic games.  Not many competitors can do that.  He did have a slight stumble but his jumps were all clean and looked strong.  I  know that Weir's program is not as intricate or difficult as Lysacek's and Plushenko's are...I can see that.  He doesn't have the footwork and artistry of Patrick Chan, although he is a lovely skater in his own right - so smooth and simple.  I looked at the scores, and to be honest, as much as he seemed underscored, it's hard to see where he would have scooped up some more points.  However, Weir got a bad edge call on the triple flip and as usual, they had some fun with that deduction.  I think he should have risked two-footing a fully-rotated quad toe loop rather than doing that flip again, which earned him only 4.30 points.  Additionally, I think that Weir could have done a bit better in components.  When I see what Chan got...I just don't feel like he gave the performance that matched those scores, particularly in executon.  And Weir did not get the benefit of the grade of execution doubt on many other jumps, either.  The complaints about Weir's difficulty and transitions have been around forever...and honestly, I don't think he would have ended up on the medal stand here, no matter what.  So I'm going to try not to be too annoyed at what seemed like low scores.  And say what you will about Johnny Weir, but he was incredibly gracious about his scores here, more so than some other top (and much less criticized) skaters have been in the past.  I'm glad that for him, for a couple of nights, it finally was all about the skating.  And the skating was great.

I have a feeling that Japan's Daisuke Takahashi is the type of skater who, had he not attempted the quad and landed all of his triples clean and not won the competition, would have maybe spent his life wondering what might have been if he'd attempted the quadruple toe.  I, however, am the type of blogger who wonders what the outcome would have been if Takahashi had landed another triple and avoided that disastrous quad fall at the beginning of his program.  One more triple would not have given Takahashi the gold, at the most it might have garnered him like six points if he got high grades of execution.  He got downgraded on another triple toe loop, and he didn't put a third jump on a planned three-jump combo.  All that done cleanly combined with one more clean triple probably WOULD have given him the gold.  How much of those small lapses were because of the terrible fall at the top, you can never tell.  I was so happy to see him pull it together right away, land fairly clean jumps, and garner the highest program components scores of all the medalists.  He deserved that, and I think the right skater won the bronze medal. UPDATED:  Was just reminded by State of the Skate that he is the first Japanese male medalist!  You go, Daisuke!

Patrick Chan's skating qualities are undeniable.  However, he is a skater who has medalled in and won competitions throughout his career without delivering the technical goods.  He has also come off as somewhat entitled and possibly immature in the press when he talks about the quad or other skaters or his own skating.  I think that not medalling here is the best thing that could have happened to Patrick Chan.  He can now concentrate on improving his technical components, like the triple axel, and he can truly dominate the sport in coming years by being able to offer clean jumps along with those beautiful spins and footwork and components. Chan had a very rough season that was plagued with injury and a rough Olympics.  These are going to be great learning experiences for him for the future.

Nobunari Oda may not have heard Sandra Bezic call him a juniorish skater, but I did, and I thought it was obnoxious.  The International Skating Union judges ate up his Chaplin program at the beginning of the season, and he was a jumping machine out there last night.  He also was able to fix his broken skate lace in as undramatic a fashion as the moment warranted.  I think maybe he should have milked it a bit more...if he had propped his skate up on the judge's table and cried it would have been a better visual!  I do not think his components were on par with Lysacek's or Takahashi's, but Oda had a great competition and he gets lost in there with the other amazing skaters.  Hopefully he can find a way to stand out in the coming years.

I am truly happy Plushenko made his comeback here.  It means so much more for Lysacek to beat Plushenko, one of the all-time greats and now a three-time Olympic medalist, than it would have meant to beat a Plushenko-less field.  Plushenko was amazing.  His jumps were not as clean as we are used to, and those grade of execution points did make the difference.  I also thought his choreography was a bit ludicrous.  But coming back after three-and-a-half years away and winning the silver medal...losing by little more than a point, was an absolutely awesome thing to watch.  Too bad he couldn't keep his dirty looks in check for the medal ceremony, and too bad NBC didn't have the class to keep the camera on Lysacek the whole time instead of focusing on Plushenko for a good chunk of the Star Spangled Banner.  I'm sure all Americans really wanted to see the Russian coughing into his glove and looking bored/ticked off while their skater was listening to his National Anthem.

Also on the comeback trail was Switzerland's Stephane Lambiel, who finished fourth here.  He gave a valiant effort, but it was just too sloppy to make it onto the podium.  His components were maybe a little high here as well, considering the performance of that La Traviata program was nowhere near what he can do.  It's sad to see him finish off the medal stand, but this was another amazing attempt and it gave skating fans yet another thing to be excited about this year.

It was great to see Jeremy Abbott jump down from 15th after the short program to 9th place.  It was also great to see him collect himself after two jumping disasters early on and land everything well after that.  Still, I did not get the positive vibe from the whole program that I hoped to get, especially considering how well he ended up skating in the end.  I hope it doesn't take Abbott too long to take something positive out of this competition.  And, hey, he was in the top ten, after all.  There's so much to love about his skating and I hated seeing him look so sad!

Shellac that stuff better next time and Fashion Watch

I think maybe Evan Lysacek lost some execution points for his one chunk of hair that kept sticking straight up during his spins.  Dear god, you would think all that gel (Dep?) would have held the hair down better.  He needed a bobby pin.

I will be doing a full fashion blog, but I want to say that I'm glad Lysacek went with the snake costume last night.  His other choices were a gray top with Lady Gaga shoulder adornments, and an outfit that showed his nipples.  So, yeah.  Glad he wore the snakes.

Takahashi also appeared to country-out his checkered shirt fetish last night.  He's been wearing a similar outfit for his long program but before it was much more tailored and crisp.

Johnny Weir's costume was so boring.  I wish he had just replaced the fur on this Nationals costume and kept it for the Olympics, because it was so much more fun!  Oh, well.  At least he had the corset for the short program.

Florent Amodio, Takahiko Kozuka, Michal Brezina, Denis Ten.  Your time will come guys, and now you have Olympic experience under your (dance) belts!

Ice dancing starts tonight!  Preview will be up later.