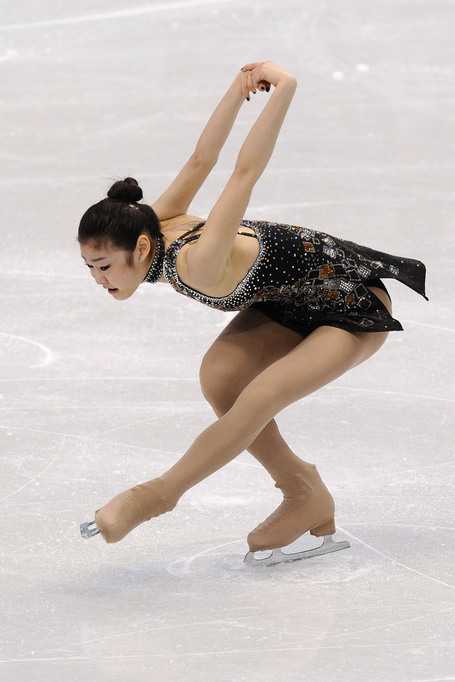 This may have been the most amazing night of ladies short program skating that I have ever seen.  Gold medal favorite Yu-na Kim of South Korea broke the all-time short program record with a 78.50, and was nearly five points ahead of her closest competition, Mao Asada of Japan.  But Asado too performed a spectacular short program.  She landed a triple axel and performed the best short program she had done all year.

Canada's Joannie Rochette was a winner just by stepping on the ice tonight so soon after her mother unexpectedly died, but she went further than that by delivering the best short program she has skated all year, to finish the night in third place.  She leads the fourth place skater by more than six points and is in excellent position to win a medal.  This was a courageous moment, and it was not lost on anyone watching Rochette.  The woman is braver than we ever could have thought.

They American youngsters are not expected to medal here but they both had impressive skates, nonetheless.  U.S. champ Rachael Flatt was spunky and energetic to snag fifth place, and Mirai Nagasu was equally adorable and finds herself in sixth.  Though neither were clean, they were both entertaining and confident tonight.

Japan's Miki Ando attempted the most difficult combination of the night and it did not pay off.  She didn't receive full credit and had a sloppy landing, and she finds herself down in fourth place.

The ladies competition concludes with the free skate on Thursday.  If it promises to be anything like what we saw tonight, then you should make sure you watch.  This was a momentous night in women's skating.