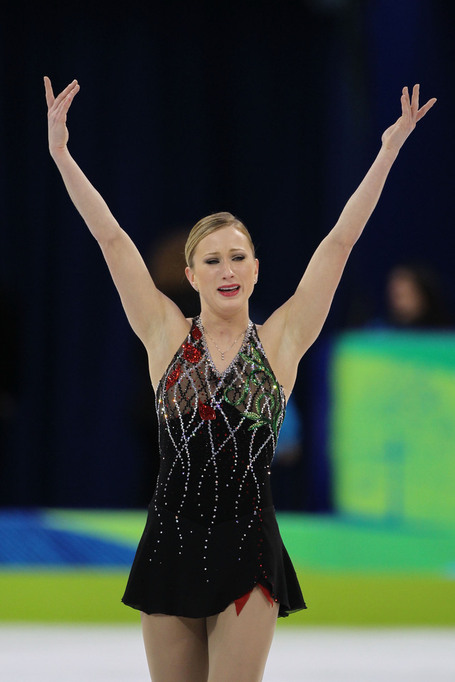 There really isn't too much to add, but just a few things to say:

Ok, so it's still unlikely that the American Ladies will medal

And if they don't, it will be the first time in more than 40 years that that happens.  But being behind the powerhouse quadruplet of Kim, Asada, Rochette, and Ando (and in Ando's case, just behind her) is really not too shabby.  Neither American lady had a perfect performance, and we should be happy with those standings. They also skated their adorable hearts out and gave the crowd something to cheer for.  BUT.  I think it was a bit low to score Flatt under a 7 for her choreography for that program. It was a great, fun program and it appeard difficult and had cool footwork.  Nagasu also obviously has a ways to go in the judges eyes before she is thought of as artistically on par with the top four ladies, which, when you're comparing Ando with Nagasu, is kind of odd.  But I actually think Ando's short is better than her free skate artistically, so maybe their components won't look as different for the free.

Explain spirals to me

I've read the judging technical rules, so I understand how spirals levels work.  But grade of execution points are supposed to be about how well you actually...execute.  So how does Yu-na Kim received a +2 for her spiral grade of execution, with arabesque spirals that are shaky and do appear to show the flexibility that some of the other ladies' spirals do?  I don't have complaints on the catch foot.  This has been my major issue with judging for Kim all year.  Her arabesque appears mediocre...I would argue that she doesn't do as well there as Asada or Nagasu, and Asada received the same GOE while Nagasu received much lower.  But I am no ballerina, so if someone can answer this, and maybe explain why Kim scores so high there, I would love to hear it.  And I know the other spiral positions Kim hits are better than the arabesque.  Other than that, I have no problem with Kim's scores.  Spirals or not, I would have had her a few points ahead of Asada.

UPDATED:  Spurred on by my helpful commenter, I have decided not to be lazy and have linked to the Go Figure Skating site, which explains the GOE better than I can.  Here is what it says:

Going off of what the judging system says, I still don't understand the +2 for Kim.  I will also reiterate that that would not have changed her standing and I still think Kim is amazing and deserves to be in first place by a few points.

It was nice to see Cheltzie Lee and Tugba Karademir

But why no love for Russia's Alena Leonova?  She can be such a joy to watch and she sits only about a point behind Mirai Nagasu.  I would have loved to have seen her in the NBC telecast last night.

After the men's competition, the top three were separated by less than a point, and we knew the free skate would be exciting.  Here, Kim has a fairly commanding lead and she will likely win tomorrow if she's clean, (no matter whether Asada does two triple axels).  But that doesn't really tell the story of those performances and the competitive fires we saw last night.  If anyone has been following Mao Asada this season and has seen the disastrous short programs she has put up...it must have been such a personal victory for her last night.  And aside from that, it was one of the best performed ladies' short programs of the Olympics!  And she did a clean triple axel (I hope some of the men were watching and taking notes).  And Yu-na Kim, who battles nerves and the expectations of millions of people, comes right after Asada and puts down the best short program ever - my god.  If anyone insults skating today I am going to have less patience than usual.

As far the competition goes, I'm hoping that even though the first and third places are so far apart and third and fourth are so far apart, we'll still see amazing skating tomorrow night, just like we did on Tuesday.  I think last night was a great showcase for ladies skating.

And Joannie Rochette is in a class by herself

Joannie Rochette has also battled through a bad season with a lot of short program falls and disasters.  So her amazing performance and clean performance of that program last night would have been something to talk about no matter what.  But this woman came out and skated her heart out just two days after her mother unexpectedly died from a heart attack.  I am tearing up just thinking of the bravery of Rochette and the emotions that skate must have held for her and her father in the stands.  I can't imagine anyone was not being moved by Rochette last night.  Not a dry eye.  And back to the competition side - she is rightfully in contention for a medal here, although what she did last night transcends medals.