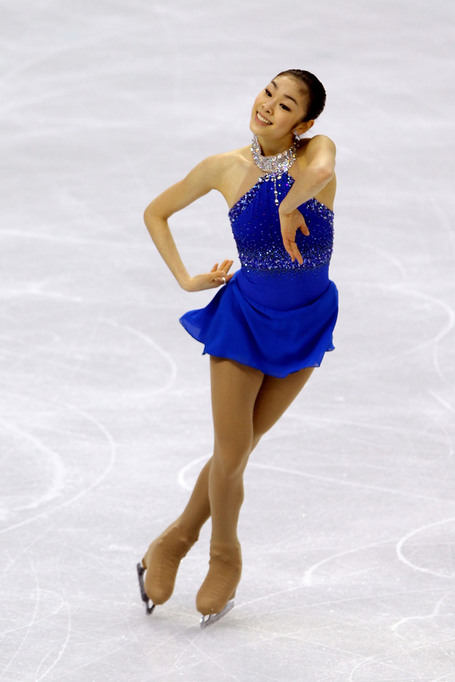 South Korea's Yu-Na Kim withstood the pressure to break the all-time free skate record to win the gold medal in Olympic ladies figure skating on Thursday.  She won by more than twenty points with a 228.56.  Japan's Mao Asada landed two triple axels in the free skate, making that three triple axels total, to win the silver medal with 205.50.  Canada's Joannie Rochette had a passionate, although imperfect skate, to easily hold onto third place and win the bronze medal.  Rochette was skating with a heavy heart; her mother died unexpectedly on Sunday and Rochette was an inspiration here.

America's Mirai Nagasu jumped down to fourth place with a 190.15 free skate to "Carmen," while her countrymate and national champion Rachael Flatt skated a clean, but downgraded program, which dropped her to seventh place.

We saw amazing performances under pressure by each lady who was in the final group (NBC decided it was unnecessary to show us many others).  There was not one fall.  Yu-Na Kim was absolutely a dream, with an effortless skate that exuded artistry without even trying.

Unfortunately, this is the first time in more than forty years that the United States ladies leave the competition without a medal.  However, both American ladies had great skates.