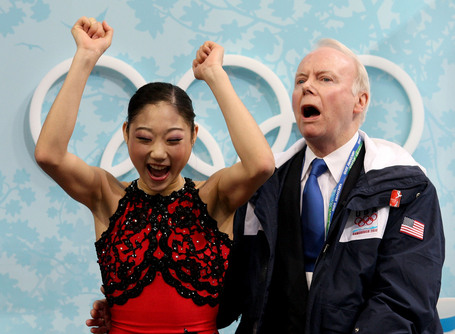 Once again, the scoreboard doesn't do justice to how good of a competition this was.  It was not a close competition.  Yu-Na Kim stood atop alone and she deserved to be there.  But there were so many notable moments that meant more than the color of a medal.

Let's start with our new gold medalist, Yu-Na Kim.  I watched her skate again and it just got better.  She did exactly what she had to do - she was perfect on the day she had to be.  And she didn't have to be perfect to win, but she had to be perfect because this was her Olympic moment.  I don't know how she skates the way she does - it seems like she makes up the programs as she goes along because everything just looks so natural and just fits her so perfectly.  You just have to watch to understand.  I also am so happy that this was the best I have ever seen her skate. And I love that she did it with technical and artistic brilliance.  I think it's hard to appreciate how fast she is and how high her jumps are from home.  I hope I'll get to see her in person at some point!

Kim is also under so much pressure and such a super-celebrity that this was one of those situations where anything short of gold is a failure (see Asada, Mao).  I think that's truly unfortunate (although I think America obviously pays more attention to gold, too), but I'm happy she was able to deliver.  I wonder whether Kim will choose to continue on under the pressure, or just skate in shows or something.  I would love to see her continue competing.

And how exciting to see Kim actually let loose with the emotions?  She's usually happy to see her high scores, but I loved seeing all the weight lifted off her shoulders and the emotion truly come through.

But before I pronounce her the queen of the world, I will say that on the aftershow NBC did point out that she can improve her spirals (so it's not just me!).  They were gushing about her overall excellence as they said it (they were...a bit over the top last night, no?).  And apparently Brian Orser is on the case.  Speaking of Brian Orser...

Many are pointing out how it took Orser only a few years to do what it took Frank Carroll so many to do.  But I think Orser had a special case with Kim, she is one for the ages.  It was so nice to see him help Kim get a gold medal, after he earned two silvers himself at the Olympics.  And if you take a look at some of his other pupils, like Adam Rippon and Christina Gao, you can tell there's more success to come.  Also, he is a very fun coach to watch on the sidelines.   It's hard not to be happy for him.

Mao Asada had to skate right after Yu-Na Kim, and I am assuming that she couldn't ignore that huge score from Kim.  She did lose focus for a moment.  But, before that, she landed TWO TRIPLE AXELS.  That is amazing.  Even if you add up the points that Asada left on the table with her botched loop and step between her combination, she would not have won this competition (although it would have been at least ten points closer, I assume).  I think that Asada is underrated as an all-around skater - her artistry and passion came out last night.  She's artistic, she's got great extension and spins, and footwork.  She is just an amazing skater.  Oh, and have I mentioned she has the triple axel?  She should get all the credit in the world for doing that, but I think people should remember that she is more than just a one-trick pony.  She is a full package.  I hate that she was sad on the podium and that this result may be viewed as a failure.  She is under almost as much (if not just as much) pressure in Japan as Yu-Na Kim.  What she did here was historic.  And if they hadn't made an age rule, she may very well have won the Olympics four years ago (ah, what might have been...).

Flatt was not cut any breaks last night, and I was surprised. I don't think most expected that she would be the American skater getting downgrades rather than Nagasu.  It really was an impressive skate, and I thought she was great overall; I couldn't believe how easy it seemed for her to land all of those jumps!  She didn't garner a whole lot of grade of execution points, either.  There are definitely things for Flatt to work on before she can truly be in the conversation with skaters like Kim, Asada, and Rochette.  Hopefully she comes back even more determined, since she seemed a bit disappointed with her score here.  Worlds will likely be more successful, though.  Medals or not, America had two very impressive skates last night.

Judging, and Rochette vs. Nagasu

I actually thought that (despite the judges being rough on the downgrades for Flatt) the judging was better for this competition than for some of the others.  I understood (most of) the scores I saw.  I know some people (I'm assuming people who are not used to this scoring system) were pulling for Nagasu to get bronze because her free skate was cleaner but I thought Rochette deserved the bronze, although I think the discrepancy between Nagasu on program components was a few points too much.

First of all, lets remember that Rochette came in with more than seven points up on Nagasu.  That would have been a lot of ground to cover unless Rochette had a fall, which she did not.  But Rochette had a bad landing on a triple flip, had a short flow out of a double axel, and maybe some lower grades of execution on other jumps.  Presentation-wise, I don't feel that Nagasu touched Rochette last night, despite being so adorable.

So, anyway, looking at the free program scores:  Rochette had negative grades of execution on three jumps and a low grade on a combination - does not look like they took it too easy on her there.  She didn't receive particularly high grades of execution on her other elements either, and ended with a 62.80 on the technical side.  Nagasu received much higher grades of execution for her elements and had a 65.83 for her technical side, despite the fact that Rochette's base value (combination of the base scores of all her elements) was actually one point more than Nagasu's was, meaning her program was more difficult.  So those scores I think are fine.

Presentation was where Rochette won in the scores - as I mentioned, I really think Rochette surpassed Nagasu in this area last night.  She used the music better throughout and obviously felt it, while Nagasu, through the first half of the program, threw in a few smiles here and there.  And I think Rochette's program was better choreographed and more intricate on the whole.  I am surprised there was an eight point gap in the program components scores - but I would have expected, like...a five point gap.  So, if Rochette did indeed receive the "Canadian bonus" on components, I don't think it made too much of a difference in the final standings.  Even if the presentation scores had been equal (giving Nagasu the higher free skate score), Rochette would have beaten Nagasu overall in the competition due to her lead from the short program.  Rochette gave the bronze medal performance here.  But I watch skating and know the scoring system, so perhaps it makes more sense to me.  The scores were also not particularly surprising; the international judges haven't been that generous to Nagasu this season in the past, so they obviously see room for improvement on components.

No skater has won me over like Nagasu.  I was not particularly impressed with her when she won the U.S. Nationals as a 14-year-old, despite her obvious talents and personality.  I wasn't that interested in her last season, until she had a valiant free skate at Nationals to end her season of growth spurts and injuries on a positive note and prove that she is truly a fighter.  As this year started, I didn't expect too much.  But something happened at Nationals (well, it actually started happening during her Grand Prix short programs...).  I think I saw in her Nationals free skate shades of what she can truly be in the future.  She did not have as much of that spark last night that she had at Nationals, but she did have clean jumps and her personality shined through.  Her youth definitely showed a bit in her movement on the ice, but I expect more and more improvement for the future.  I'm excited to watch her.  She has speed, jumps (fingers crossed for the triple/triple) elegance, beautiful lines and positions, and the personality to match.  Her joy at being in fourth place last night was so heartwarming.  I just love how comfortable she was with her skate and how happy she was.

The combined performances of Joannie Rochette here were not only very good (the short was amazing, the free skate had some errors but so much fight!), but inspirational.  I was so happy to see her get that bronze medal after what she's gone through this week with her mother's death.  I thought the medal was so deserved and so emotional.  And she has just been so gracious to give interviews and talk about her mother in them...this is a bronze medal performance I won't soon forget.  Also, it's the cleanest bronze medal performance we've seen in a few Olympics.

Poor Miki Ando.  She skated clean here but had a truly forgettable performance.  She just never cultivated the artistic side of skating the way others have, or just doesn't feel the music.  It's sad that her placement was disappointing after a truly good couple of skates, but skating isn't only about clean jumps.

NBC should have shown the last two groups of ladies.  Or, since they were putting people on tape delay, show Kiira Korpi, who apparently had the skate of her life, or Ksenia Makarova, who is going to be one to watch in the future.  Or Laura Lepisto, who finished in the top six.  Additionally, the gushing last night was over the top, and it just seemed lazy how much they emphasized Flatt's studies over and over.  I mean, I don't understand why they would keep talking about it.  Still, it was an emotional night, and I guess if you're going to be over the top, the ladies free skate is the time to do it.

I'm so sad that the Olympics are over.  I'll continue having Olympic-related posts, including all the breaking news andanalysis and of course, a fashion post!  Please remember to come back to the site for daily skating news and the don't forget that the world championships start on March 22 in Torino!