A look at 2010 Vancouver Olympic figure skating fashion highs and lows. We'll review some of the wackiest costumes, and then I'll name some of my favorites...and my least favorite.

One thing that struck me was that so many of the skaters seemed to want to be anywhere but at an ice rink.

They'd rather be playing Farmville.... 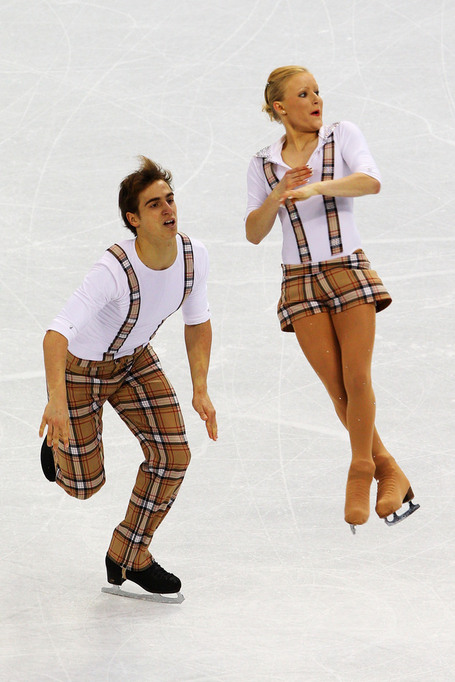 Anais Morand and Antoine Dourzat:  In the case of this overall-loving Swiss team, their farm would be located in an upscale section of London. 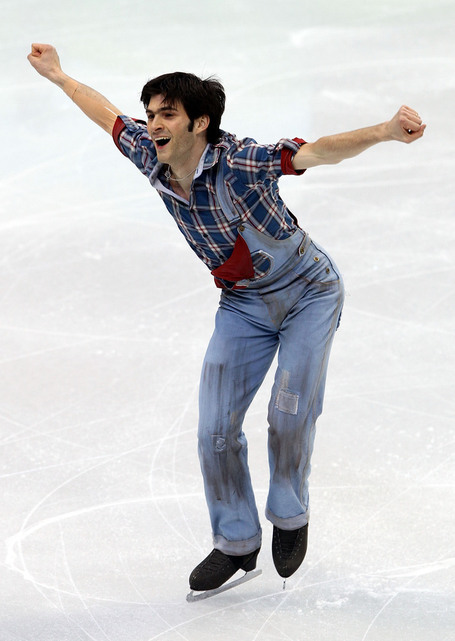 Samuel Contesti:  Contesti's farm would be located in the early 1990s, when people were too lazy to strap both of their overall straps (as I've pointed out in an earlier fashion blog).

They'd rather join the circus... 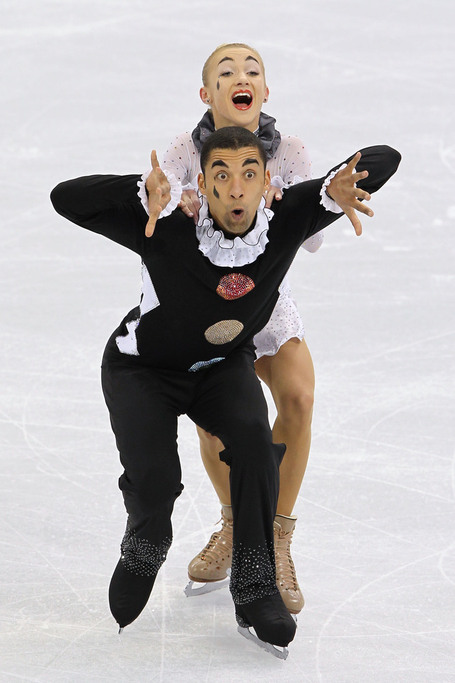 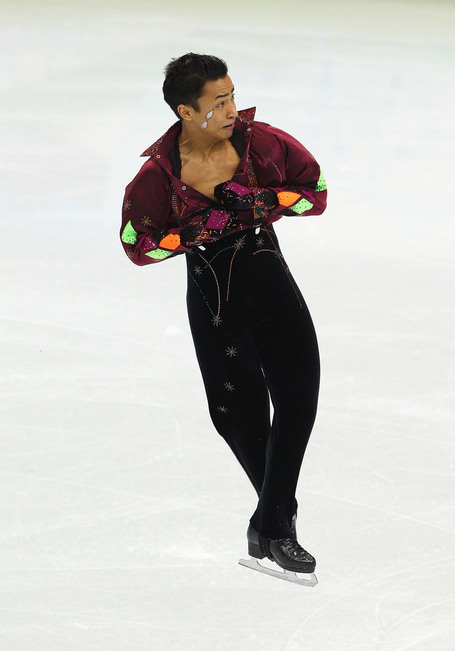 They'd rather be auditioning for Disney's Enchanted Tiki Room... 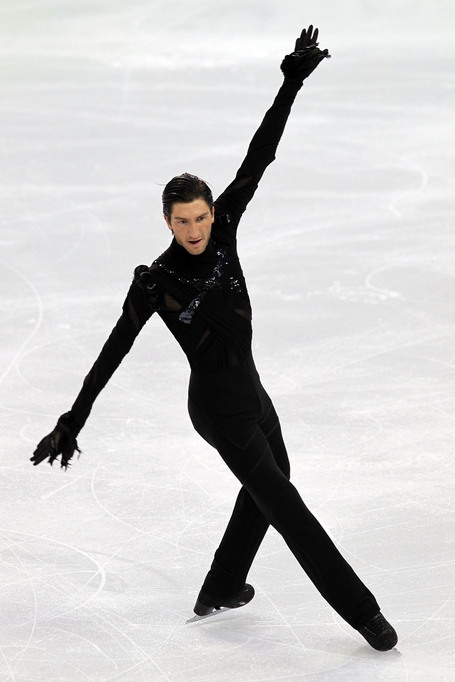 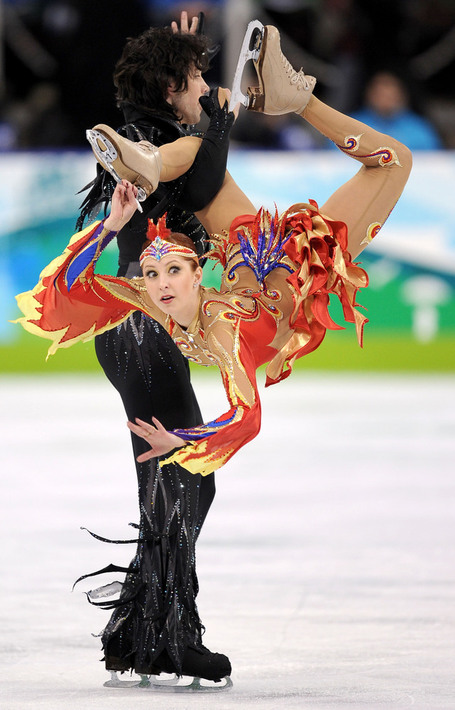 Jana Khokhlova and Sergei Novitski:  They were flying in these costumes.  Flying.  Like the Firebird-sized anvil they dropped on my head. 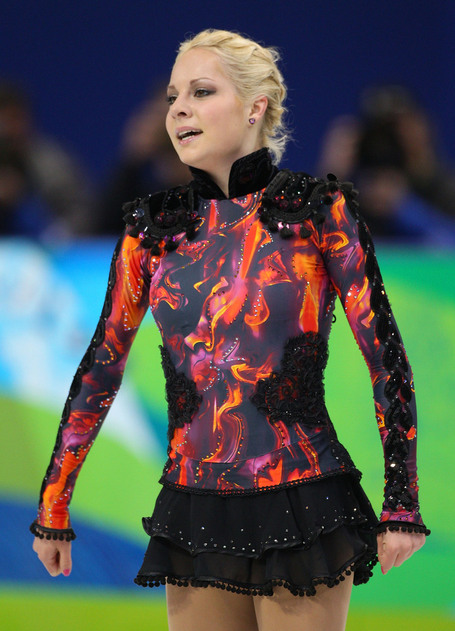 Elena Glebova:  There were no feathers on Glebova's costume.  But she still seems like a tropical bird to me.

They'd rather be hanging out on the dashboard of your car... 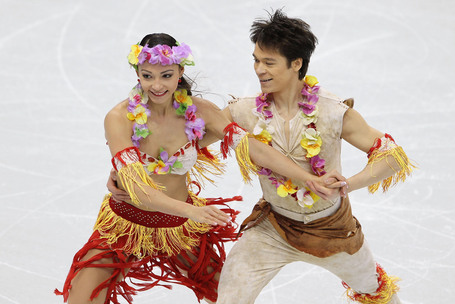 They'd rather be getting a "mom" tattoo on their biceps... 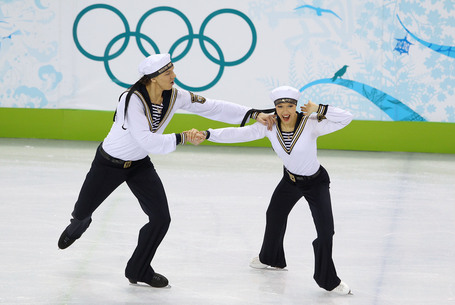 Ekaterina Bobrova and Dmitri Soloviev:  Oddly enough, they changed from one sailor costume to another through the season.  And yet...the pain is the same.

They'd rather be at the country club, sipping highballs and lamenting high taxes... 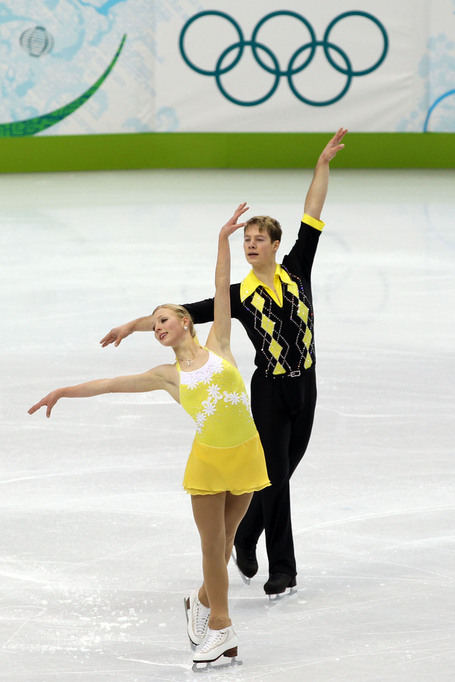 Maria Sergejeva and Ilja Glebov:  "It takes two to make an accident." - The Great Gatsby by F. Scott Fitzgerald 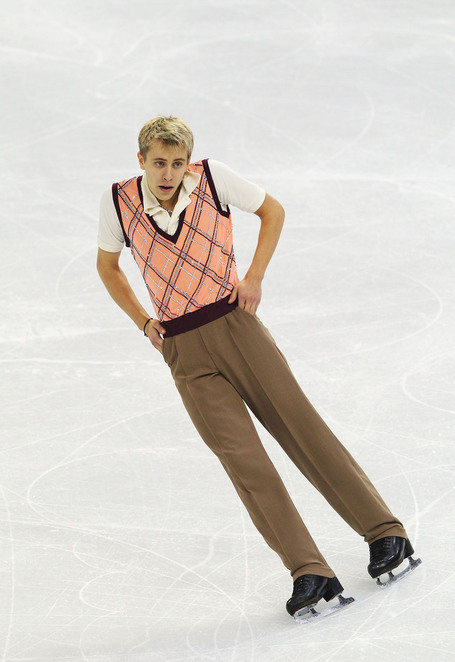 Michal Brezina:  I love a good argyle sweater-vest.  And a pink one paired with dapper khakis?  Splendid!

They would rather be posing as scenery in an elementary school play... 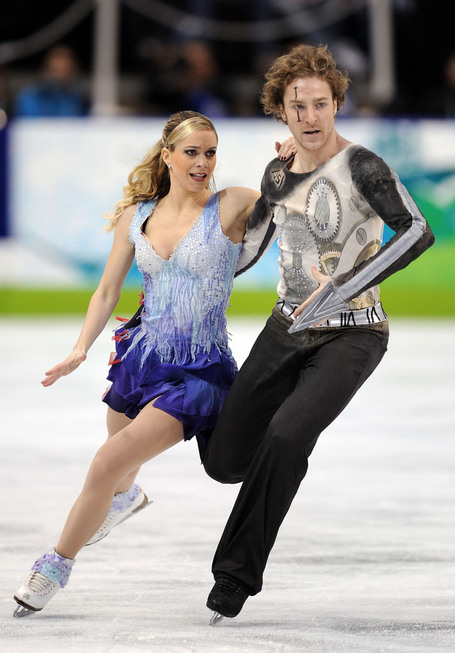 Nathalie Pechalat and Fabian Bourzat:  I think he is literally supposed to be a clock. "Goodbye to clocks ticking." - Our Town by Thornton Wilder.  Goodbye to Requiem for a Dream, goodbye to this outfit. 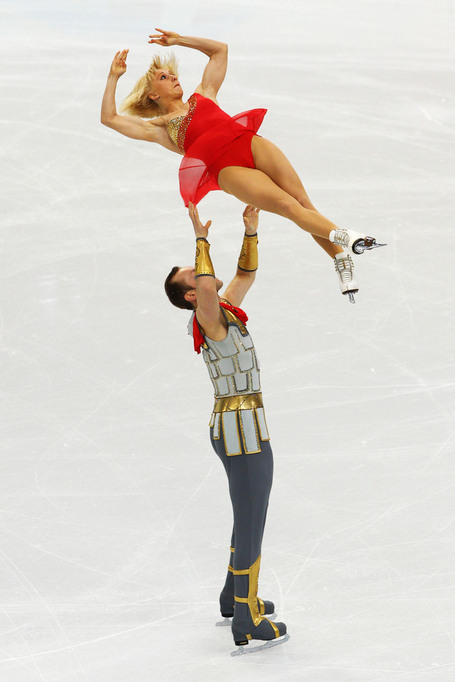 Maylin Hausch and Daniel Wende: This German pair's outfit was meant for Rome but would also work in any medieval play....or even this episode of The Cosby Show.

They would rather be haunting your dreams... 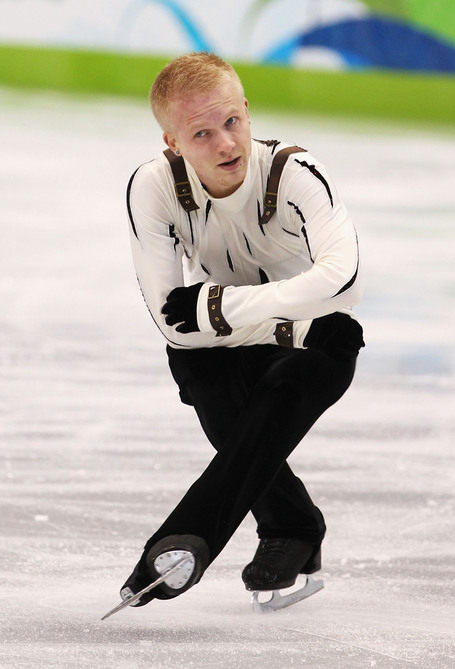 Adrien Schultheiss:  And his straight jacket.  And that crazy look in his eyes. 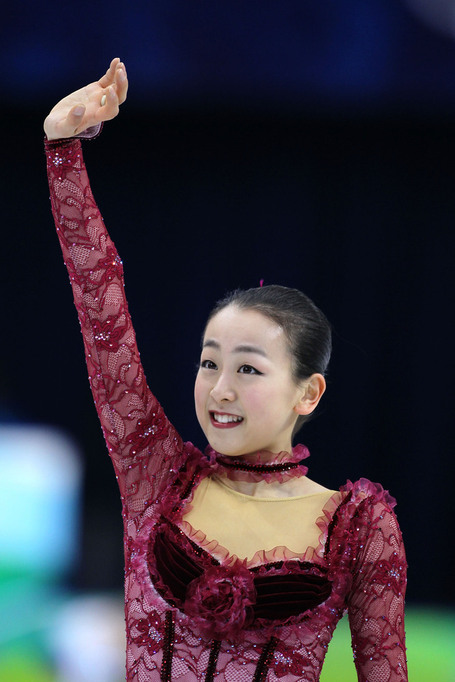 Mao Asada:  Sure, she looks normal....you think.  But she has a certain affinity for chokers.  Remember the scary story from when you were little, "The Green Ribbon"?  The summary is that this lady wore a green ribbon around her neck her whole life and her husband always asked her why she wouldn't take it off and she would always say she'd tell him later, until finally, on her deathbed, he asked again.  And she told him he could finally untie the ribbon and see why she always had to wear it.  And he unties it and HER HEAD FALLS OFF.

Yeah, that's what Mao reminds me of. 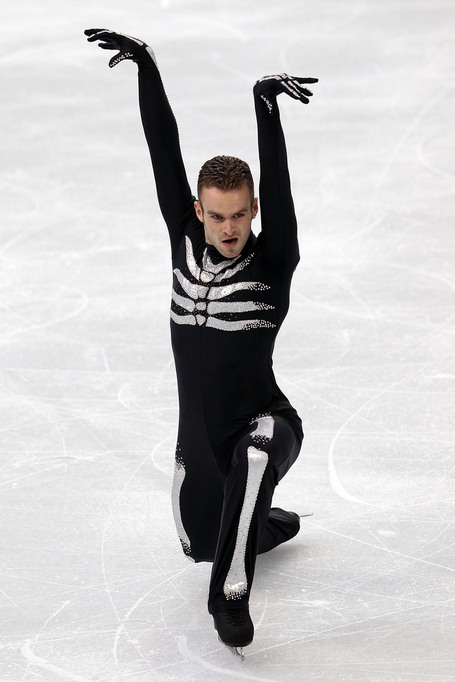 Kevin van der Perren:  I was so sure he would retire the bones after last season.  I was wrong.  And I know I'm not the only one who was secretly hoping they would turn out the lights in the arena so we could see whether or not he glowed in the dark. 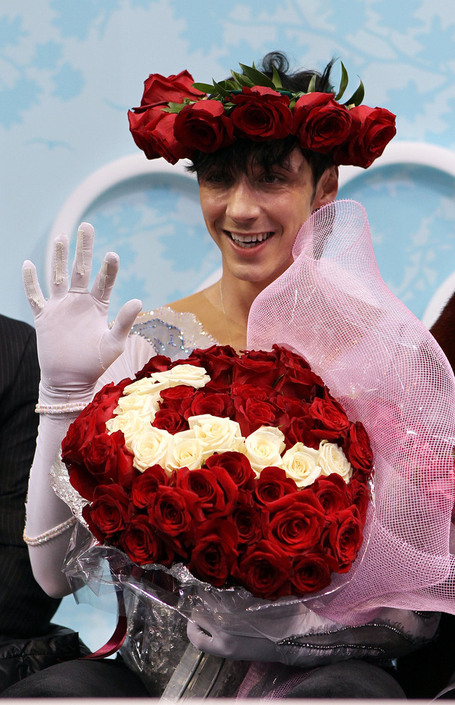 Some skaters actually looked like they belonged on the ice.  And of those skaters, some had pretty costumes. 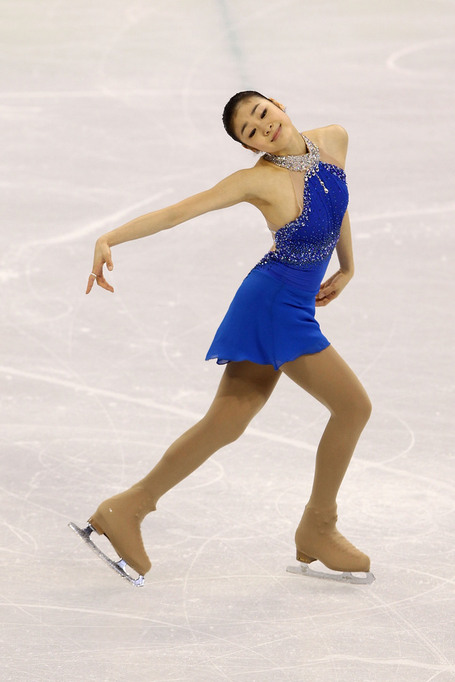 Yu-Na Kim:  The queen wins a costume medal as well.  My favorite part of the costume was the back with the beautiful beading but I could not find a great picture.  It was a great color and style for her. 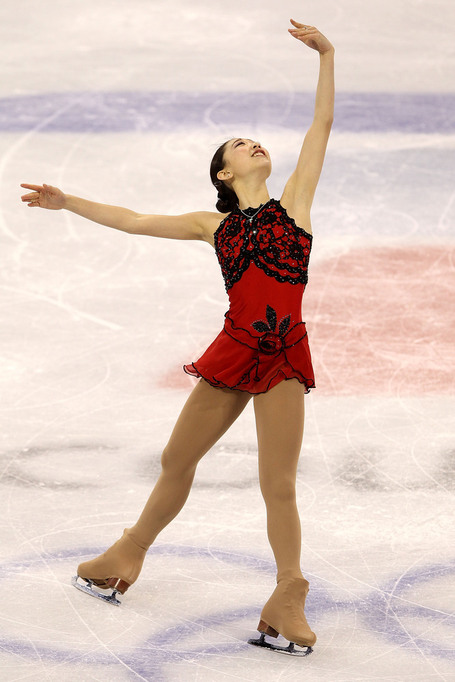 Mirai Nagasu:  This costume was perfect.  It was age-appropriate, sophisticated, and classy. 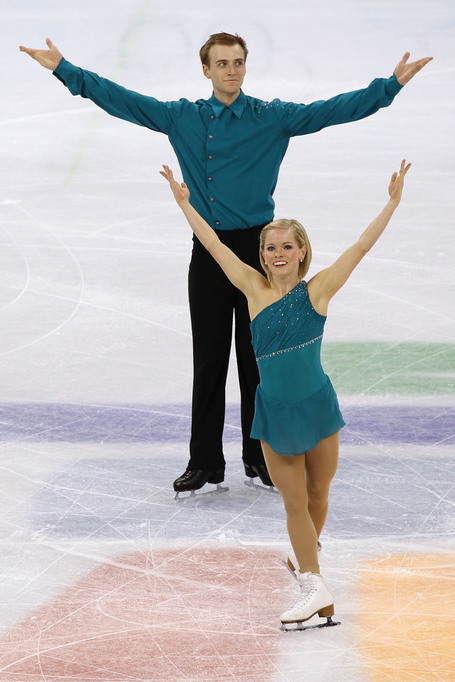 Anabelle Langlois and Cody Hay:  I liked the color and the style here.  It looks like his shirt is tucked a little weird but I assume that's because it's at the end of the program. 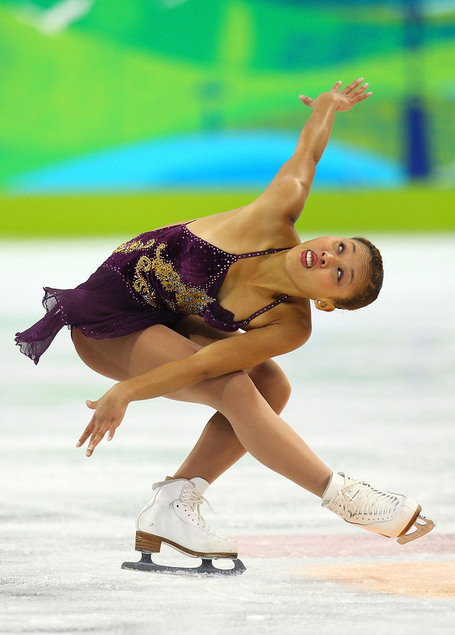 Cheltzie Lee:  A beautiful deep purple costume with gold embellishments that were on the back as well.  Gorgeous.  The boyfriend thinks she looks like a bottle of Crown Royal.  But I think he means that as a compliment. 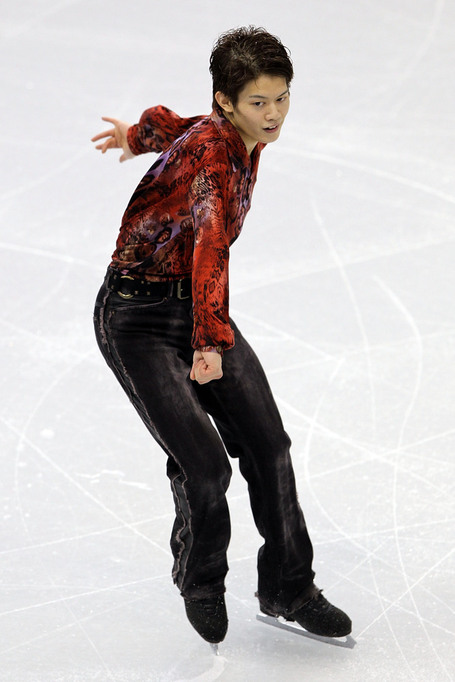 Takahiko Kozuka:  As if I was going to leave the tiger off of this list! 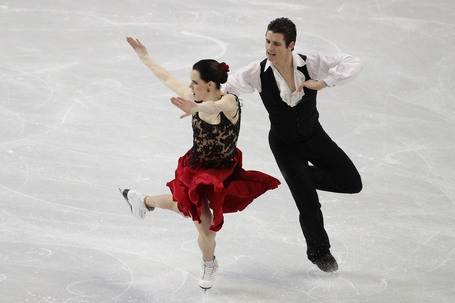 Tessa Virtue and Scott Moir:  For that dance, this was perfection!  And she didn't trip over the skirt! 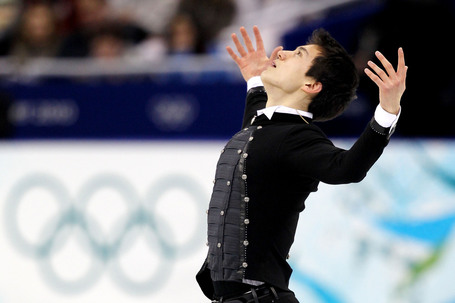 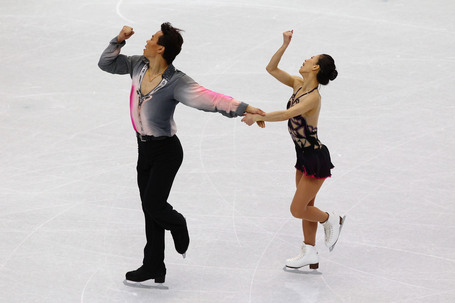 Shen and Zhao:  These outfits looked better on television than they do in pictures, but I really liked them. 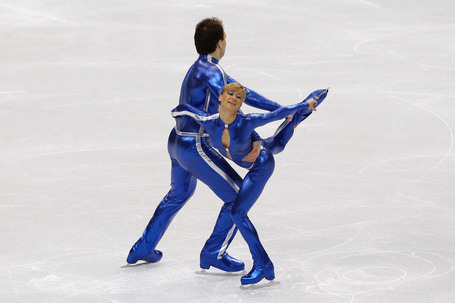 Tatiana Volosozhar and Sergei Morozov: SIKE!  Yeah, right!  These two looked ridiculous!  Which is a fine segue into... 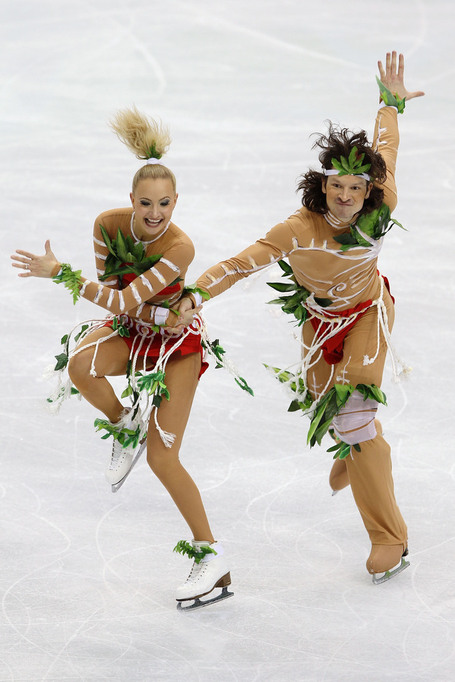 Oksana Domnina and Maxim Shabalin:  There were other costumes that I was going to add here, but none deserved to be in the same category as Domnina and Shabalin's original dance outfits.  Not only offensive to the culture they were highlighting, but the entire presentation was also so ugly that it made my eyes bleed.  And the additional leaves thrown on Domnina's skates added just that extra touch of class.  Thank you again, ice dancing.