Checking in on our Olympians

Share All sharing options for: Checking in on our Olympians

What are the figure skaters who represented Team USA at the Olympics up to in the weeks since the Olympics ended?  Let's check it out. 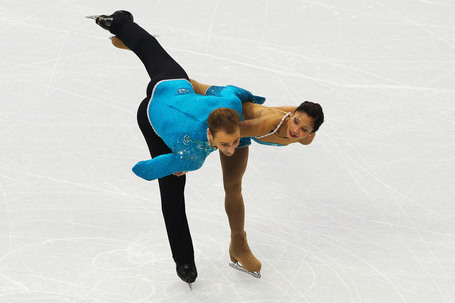 Amanda Evora and Mark Ladwig:  Well, we heard over and over again on the NBC broadcast about how poor Mark is, but thankfully, things are looking up.  According to the Herald-Tribune:

Another welcome but unexpected change in Ladwig's life was news of a funding increase from the United States Figure Skating Association.

The organization funds skaters depending on their potential to perform well at international competition.

There are three tiers of annual funding; Ladwig and Evora have moved up to qualify for the highest funding possible in the next fiscal year.

"I'm so grateful for that," Ladwig said. "The increase basically secures that I'll be able to pay my mortgage and continue skating."

I'm so glad that they got more funding and can continue on - they just started coming into their own at the Olympics, where they finished 10th.  The article mentions that Evora is looking into how she can start giving back to people. "She is considering running marathons and helping to promote nonprofit foundations."  Evora and Ladwig are scheduled to compete in the upcoming world championships, which begin in less than two weeks.

Caydee Denney and Jeremy Barrett:  The article states that Denney and Barrett will be skating in some Florida stops on the Stars on Ice tour (to be honest...I would almost rather see Evora and Ladwig because of those amazing lifts!).  They will also be promoting skin care products in Florida as part of the Pure Chemistry line.

Denney has received a scholarship to an online academy, although it's unclear if she's accepting it.  She's also developed a new interest in broadcast journalism (if I had a nickel for every skater who wanted to be a broadcast journalist...).  Denney and Barrett are planning on competing in the world championships as well.

Tanith Belbin and Ben Agosto:  Belbin and Agosto haven't officially hung up the skates yet, but they will not be competing in next month's world championships.  They seem satisfied with the Olympics marking the end of their career.  Belbin and Agosto will be touring with Stars on Ice.  Additionally, according to the Associated Press, Belbin would like to become a broadcaster (DRINK!) and Agosto would like to go to school for physical therapy.  I wonder when those plans are going to take place?

Meryl Davis and Charlie White: Despite Davis and White's silver medal at the Olympics, I have read less about them than I have about both Belbin and Agosto and Virtue and Moir.  These two need new agents or something.  Anyway, they are back at work in Michigan, training hard for the upcoming world championships, per the Detroit News.  They are also joining the Stars on Ice tour.  They have also been celebrated in Canton Township, where they train, as well as featured in various articles about Bollywood and their Bollywood-style original dance.

Rachael Flatt:  Not too much information on Flatt's activities since the Olympics.  I'd assume she's been writing essays and training for the upcoming world championships.  She had a few endorsement deals coming into the Olympics and some are saying that she might be on tap for more leading up to Sochi, including the New York Times.  I assume she'll be attending [insert name of prestigious university] in the fall, and I wonder what effect that will have on her skating?

Mirai Nagasu:  Nagasu was also mentioned in the Times article.  She too will be attending the world championships in a few weeks.  Nagasu will be honored tonight along with Evan Lysacek at the Toyota Sports Center in El Segundo, California, where she has trained.

It's the first time in recent history that the men who competed in the Olympics for the United States are receiving more attention than the ladies!  So weird.

Evan Lysacek:  Lysacek appears to be the number one media presence among the skating Olympians post-Vancouver.  He'll be on Dancing with the Stars, he's been on more television shows than I can count, and he made the rounds at the recent Oscar parties. Lysacek will also be touring with Stars on Ice and is not competing at the world championships.

Johnny Weir:  Weir is planning on competing at the world championships.  He has also been on numerous television shows and was photographed on the Oscar circuit (apparently with his new best friend who he just met, Kelly Osbourne).  Weir's reality show wraps up this month and it's unclear if it will go another season, but I would love to keep watching it.  In a recent LA Times article, Weir said he hopes to study at New York's Fashion Institute of Technology following his skating career.  I really respect that he wants to learn about fashion and not just capitalize on his celebrity to "launch a line" of clothing or something.  Weir has also lobbied for a spot on Dancing with the Stars in the future, per this InsideTv interview.