Here is an interview with Johnny Weir on ESPN.  Weir is all over the place promoting his book "Welcome to My World," and he's been on every show and media outlet.  I chose to link this interview because it's from an actual sports site.  It tries to focus on skating a bit but of course, leads with the question about Weir stating he is gay. 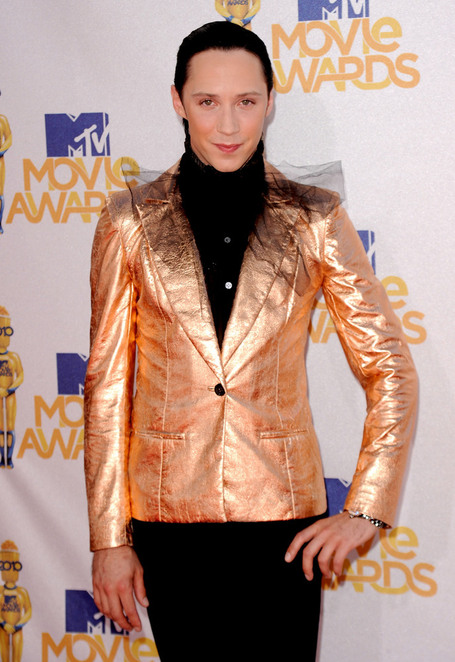 Those who read this blog know that Weir has annoyed me a lot since the Olympics in his perpetuation of this myth that the reason he didn't win the Olympics was that he was too balletic or not masculine enough or something...he tries it again in this interview but it's kind of his schtick now.  To be honest, though it annoys me, I can't blame him.  He is speaking mainly to an audience that is uneducated about skating and many people don't understand why he didn't medal last year, and don't remember how he lost his chance in 2006.  Why not play up the political victim angle?  It makes him look all the more resilient.

He also discusses his desire to somehow compete in Sochi...

"Do I think I could qualify for the United States to compete in Sochi? I'm not sure, because I know how our federation works and I know that they'll want to promote the younger skaters and they don't always love somebody coming back and trying to steal one of the spots again. I've been kind of under-the-radar exploring many different options on how I could get myself to Sochi, if I could work that hard again, if my mind could function that way again.

I am wondering if he is considering (as has been the rumor) attempting to qualify for some other country's team for Sochi?  I don't know if I see any of this happening.  I think he's got a good thing going with the public thinking he was robbed in Vancouver and if he came back in Sochi and didn't skate well, it would be a huge letdown.

Has anyone read Weir's book?  I would love to hear what you think.