Let's start with the most predictable category first (and the category I'm least able to coherently critique!):  ice dancing.  There doesn't seem to be any question as to which team will take the top spot this season (reigning champs Davis and White). However, numerous teams will be scrambling to assert themselves as the new number two squad in American, since Emily Samuelson and Evan Bates are still out with injury. I personally think Samuelson and Bates would likely be the silver medalists here, if they could compete.  I personally think they're a bit better than the other teams I find contending for the silver and bronze medals...although those teams have come a long way this season. 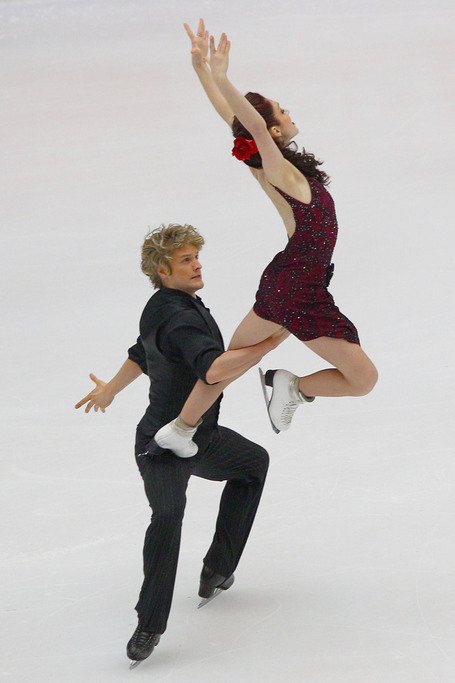 Meryl Davis and Charlie White:  I don't see any other team coming in here and snatching this title out of Davis and White's hands.  These two have easily won every competition they've entered this season, and they are looking for their third national championship.  They are technically and artistically worlds ahead of the other contenders here, in my opinion.

That doesn't mean there isn't room for criticism.  I like their short dance (as much as I can like any short dance, lord do I hate the short dance).  I don't particularly like their free dance.  I know it's very difficult (to the point where they have had to continually modify it because it's almost too much for the judges to take).  I know how well they perform it.  But I think that this season, since they are not doing a character-driven piece like Samson and Delilah and Phantom and are instead relying on that raw sexual connection that is necessary in tango...it is kind of not hitting for me.  I don't believe these two as the protagonists in some passionate tango push and pull...and that is likely part of what is taking away from the dance for me.  I wish I could say otherwise but I've seen it three times now and it's just not clicking for me.  That's not to say it's not the best free dance being done this season...I think it probably is. Another issue that may be inadvertently influencing me is that commentators tend to talk too much during the dancing...like they feel we need the full "story" of what each dance is portraying..and when they describe the story behind Davis and White's free dance, I always find myself scratching my head because I just don't see this storyline in what they're doing. I am trying not to hold that inane chatter against them.

Madison Hubbell and Kieffer Hubbell:  I don't really know what to say about this team.  I've never particularly enjoyed their programs, and this season they haven't seemed to show much fight in a very important season for up and coming teams.  They withdrew from Rostelecom Cup, citing injury.  They came in sixth here last season...in the absence of Belbin and Agosto and Samuelson and Bates, I guess anything lower than a fourth place finish would be a major disappointment.

Lynn Kreingkrairut and Logan Giuletti-Schmitt:  We saw these two on the Grand Prix circuit this season.  The big thing to look for here is if they can leapfrog the Hubbells into fourth place.  I am not sure that they can, but then, I haven't watched them too much over the years.  If they do, it would be quite a coup, as the Hubbells have garnered much more attention and international success over the years. This pair was 8th at last season's nationals.

Maia Shibutani and Alex Shibutani:  The reigning junior national champs have made quite a splash on the senior circuit this season, winning two Grand Prix bronze medals.  I like this team and I think they have good programs, although they have had some trouble here and there with errors this season.  I think they have good technique overall and are a definite contender for silver here.  I also think they have some maturing to do in their skating but they're fun to watch and I'm actually excited to see these teams duke it out for the other two world berths.

Madison Zuerlein and Greg Chock:  This pair, former world junior champs, have made a nice, steady climb in the senior rankings, showing improvement every season.  They have some really fun moments in their free dance this season and they're showing more personality.  They also captured two bronze medals on the Grand Prix circuit.  I think the most competition is between this team and the Shibutanis for the silver and it could get exciting.

I'm not sure whether I'm doing predictions yet.  If I do, I'll put out a post with all of the predictions on it.