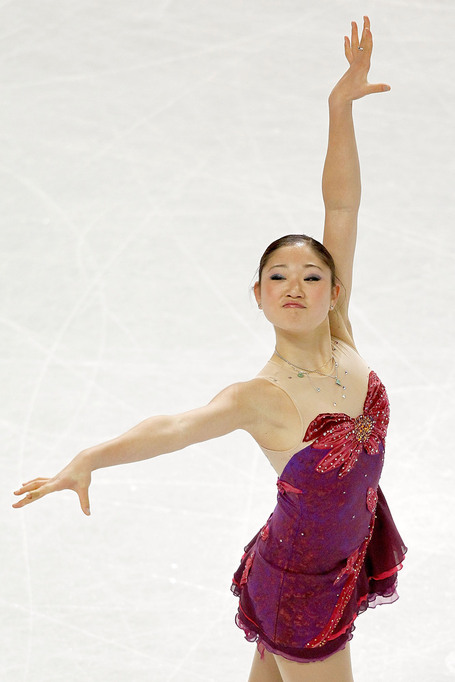 The full results can be seen over at icenetwork.  2008 champ Mirai Nagasu was able to sneak away with the lead after an amazing night of ladies skating, followed by Alissa Czisny and Rachael Flatt.  Rounding out the top six are Agnes Zawadzki, Christina Gao, Vanessa Lam.  Ashley Wagner had some errors and is in seventh.  None of the top ladies fell and it is going to be a very exciting showdown on Saturday.  My only disappointment is that none of the top three ladies did a triple/triple, but there were definitely a few done and they were wonderful!

I'm going to focus on the top seven tonight because they all skated pretty well and really stuck out for me.

Ashley Wagner:  Wagner had some trouble on the landing of the triple flip and was unable to tack on the combination.  She added it to the triple lutz, but she two-footed the lutz.  Then she had a bit of a shaky landing on her double axel.  Very unfortunate, possibly due to having the flu, but who knows.  I thought she did a great job performing the program.  And after a night of watching a lot of immature performers, Wagner looked very polished and I really enjoyed watching it.  Sad about the jumps, but on a night like tonight, no room for so many errors.  She's in seventh with a 54.63...not looking great for a medal but don't count her out.

Vanessa Lam:  I know I've seen Lam before but I haven't seen much of her.  She really impressed me tonight.  What a nice style and she actually made me sit on the edge of my seat and take notice.  She's way more mature on the ice than her 15 years.  Just a lovely presence and what a great performance tonight...deserved the standing ovation she got.  And she's only in sixth!  That's how good the skating was.  57.61

Christina Gao:  Well, Gao starts right off with a much more mature look than last season.  I think it really works for her.  She's looking so much more grown up and she's got her hair up in a bun and some bangs action going on.  And she hit a triple lutz flip/triple toe loop.  That was impressive.  She's still got issues such as posture and her double axel was lucky to land, but great job overall.  Would love to see more speed/energy in her footwork but I'll take that triple lutz combo any day.  58.43, fifth place.

Agnes Zawadzki:  I have to say, I just love seeing Agnes perform this short program.  She's just so adorable in her ridiculous outfit being all sassy.  And she kills it!  Triple/triple was beautiful, as were the rest of the jumps.  She's young but she's got so much energy.  Just fun to watch.  I hope she can have a good free skate.  61.54, fourth place.

Rachael Flatt:  Ok, so it was more difficult for me to watch Flatt skate to this East of Eden music than I expected it to be.   At any rate, I rate it as a vast improvement over her other short program.  I think she skated those jumps fabulously (although, why not go for the triple/triple!?  She would easily have been in first).  I think she performed the heck out of the program, particularly attacking the step sequence.  But.. during the step sequence there did appear to be some flailing (my innocent bystander non-blogger friend's words, not mine!), although I don't think it was actually flailing, I think it was the choreography, and way too much arm movement.  And the fact that she outscored Czisny on program components is confusing, but she did seem to have more emotion than Czisny, who is much calmer.  And she really sold the heck out of the program.  So perhaps that helped propel her over.  At any rate, I think third is just about right, and remember, Flatt went from third to first at last year's nationals.  62.32.

Alissa Czisny:  Czisny as beautiful and understated, as she tends to be.  She had a bit of a tight landing on her double axel but overall just a beautiful performance and so happy she skated clean.  Not much more to say - her spins are amazing, one of the top two spinners in the competition.  She did not have the attack that Rachael Flatt had, but that's not really her style.  It's soclose!  62.50.

Mirai Nagasu (pictured) :  The short program queen lays down another one, and charms the press with her made for tv one-liners.  Nagasu was Nagasu the great tonight.  She was adorable and absolutely elegant with everything and did not make any mistakes that I could see.  She even made me like her short program more!  Crazy.  I hope she can hold it together and maybe even throw out a triple/triple on Saturday.  63.35.