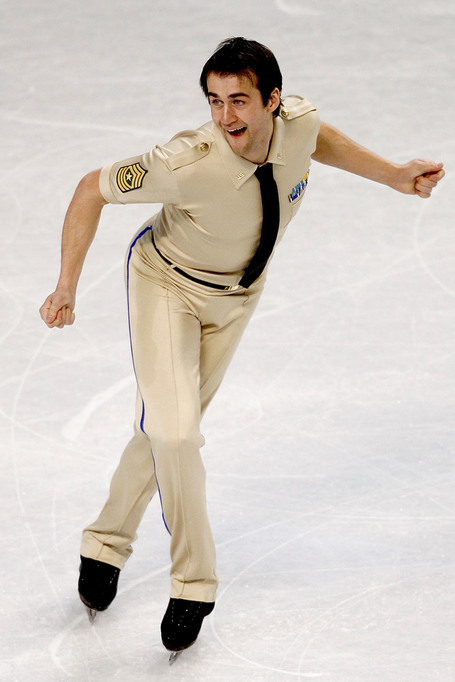 Update:  For full results...visit icenetwork.  Ryan Bradley decided not to retire because he had such great support from his fans, and he gave the short program of his life tonight.  What an amazing performance.  He just edged out a very good Jeremy Abbott for the lead.  Brandon Mroz is way back in third place.  Keegan Messing is in fourth place -  I was surprised his score held up but some of the bigger names had falls.  Douglas Razzano had another of the performances of the night and he's in fifth.  Ross Miner rounds out the top six.

Here is what I thought as I watched the men's competition unfold in the short program Friday night...in the order of how they skated.

Keegan Messing:  I don't know why this poor boy's outfit got me!  It is like one ivy trail up a costume too many for me.  I have to take a break from watching skating if that does me in, I think!  Anyway, Keegan had a few nice landings.  Tonia Kwiatkowski, the commentator, seemed to think he's really grown artistically but I don't think he's there yet.  He made Brandon Mroz look like extremely artistic by comparison.  But it was a good skate overall.  No quad.  69.79

Adam Rippon:  Oh, he lands the first two passes and then just falls on his butt in the Rippon lutz, performed with both hands over his head.  He wasn't looking stellar in the beginning either...his triple axel was a bit all over the place.  It's so sad because Rippon is just such a beautiful skater.  It took away from the routine a bit but his artistry can't help but shine through.  It's a lot of ground to make up, though.  66.26

Brandon Mroz:  Mroz gets better and better in his performance every time I see him this season.  Very cool.  He landed the quad but it was sloppy and I think he got a downgrade on it.  And then he could only tack on a double toe.  He was ok on the other jumps and gave a pretty good performance...but he lacks the strength in components.  71.61

Jonathan Cassar:  I missed Cassar because my dog knocked over a container of olives.  That is not a smell you want all over the apartment, as much as I love olives.  Anyway.  As I returned, apparently Cassar had a fall and also lost his chain on the ice.  There was a hilarious moment when coach Frank Carroll covered Cassar with a jacket while he checked his...costume..ahem...for the chain.  And my boyfriend started making "off the chain" jokes.  And then the announcer said that this event was for general audiences.  And they searched for the chain while Jeremy Abbott waited, and waited.  55.98

Jeremy Abbott:  Abbott was determined!  He wasn't perfect..his final triple landing was very off, but nothing terrible and still considered clean.  I have a feeling he thinks these arm movements work better than they do...not my favorite program but he really attacked it.  I just get the feeling like this is the event where he feels most comfortable and at home.  He looked great...even though that one landing wasn't fabulous, he sold it.  78.39

BREAK.  They found the bling!

Wesley Campbell:  This guy looks like Prince Harry on my super pixellated computer network stream.  He is skating to Metallica and I like the choice but he is having troubles with the jumps.  He only eeks out a triple/double and then he has problems landing the triple axel nicely as well.  It may have been underrotated.  Not the greatest program and he's a bit slow towards the end.  59.35

Jason Brown: Doesn't have a competition-ready triple axel yet.  He has a ponytail, though!  Don't see that everyday in men's figure skating.  His jumps are no big deal but his spins have a lot of potential.  He has a few that I haven't seen before or even at all.  So that's fun.  Some difficult footwork as well although it could be performed better.  64.32.

Douglas Razzano: Originally from Long Island (shout out!).  This guy has 80s hair.  He could definitely have played one of the villains in Karate Kid.  A wonderful performance from Razzano!  He landed a very nice quad toe..his triple axel beforehand was clean but a bit crazy.  Triple toe/triple toe.  Some beautiful spins and he had a nice performance.  I don't know...I was impressed.  Coach and crowd are not happy with components.  He's no Jeremy Abbott..but maybe could have given him a bit more on components.  69.61

Parker Pennington:  Pennington apparently choreographed both of his programs.  It is a little cheesy at the beginning of the program.  Then he falls on a triple axel.  Then I had to answer the door.  55.49

BREAK to recognize this year's Hall of Fame inductees - the 1961 world figure skating team members as well as the coaches, judges, officials, and family members who perished in a plane crash.  This is the 50th anniversary of the crash.  So tragic.  Peggy Fleming and Paul Wylie come out to induct the team and read off the names.  So sad to see all the pictures and think about all of the lives cut short that day.

Ross Miner: Big smile for Miner...he must be so happy he can compete here this season.  Gorgeous triple axel to start things off but he had some troubles with his combo and only added a double toe to his triple lutz.  His triple flip was beautiful though.  His Emmanuel Sandhu spin is pretty atrocious.  He should maybe drop that.  Slightly out of gas at the end but nice performance through much of the program.  The technical elements will not be high enough, though.  67.99...into fifth ahead of Adam Rippon.

Grant Hochstein:  Hochstein has a beautiful, polished presentation and some gorgeous spin positions.  His jumps were all lovely too, but they were not difficult enough for this level of competition.  He only had a double axel and his third jumping pass was a triple loop.  So that's not going to get him the high scores.  But that was a really nice performance and he did do the triple lutz/triple toe.  I just need to see that triple axel!  65.76.

Scott Dyer:  Triple lutz/triple toe, but then a double axel and a downgraded fallen loop.  Has a nice look on the ice at times. I got kind of bored in this program and I think it's naptime!  But Ryan Bradley is next so I have to power through!   55.78

Ryan Bradley:  Adorable outfit for Boogie Woogie Bugle Boy.  WOW, quad toe/triple toe.  I mean...WOW.  AND he lands the triple axel. AND he lands the triple flip.  Oh wow.  Very cute program, crowd pleasing, doing what he does best.  And this arena is happy he came back.  I would give it to him because that was just an awesome performance.  AND WE HAVE A NEW LEADER.  He is sooo excited!!! YAY.  Very very exciting.  80.39...beats his personal best by nearly ten points.  Awesome!

Christopher Caluza:  Sorry, Christopher. I am still trying to get over Bradley's performance.  Caluza is landing his jumps but is very young-looking out there.  What a tough act to follow.  Double axel. I'm tired of the double axels but I understand these skaters are still working on it.  It's just weird not to see triple axels.  He did a good job, especially considering coming in after such a crowd pleaser.  59.28

Lloyd Ting:  What Lloyd Ting doesn't have in jumps he makes up for with costume.  That is quite a vest and shiny shirt situation.  Ting has a double axel and he falls on the end of his (big) triple lutz/(smaller) triple toe combination.  And has a shaky landing on his next jump.  Poor Lloyd.  44.50

Joshua Farris:  I really like what I'm seeing from Farris.  Yes he fell on this triple axel but at least he has one, and he landed his triple lutz/triple toe and triple flip beautifully.  He has a nice mature style for someone so young (16) and I think he's got a lot of potential.  Looking forward to seeing more of him.  60.91

Jason Wong:  Wong had some jumping troubles but didn't let it detract from his performance.  I did, however, find some of his spin positions to be somewhat disturbing.  His first camel looked like his leg was broken. WEIRD.  I assume I'm the only one with this sicko reaction. 62.20

Richard Dornbush:  Officially too many open shirts at this competition!  Dornbush fights for the landings of the first two jumping passes and then kind of loses the landing on the last pass.  But I love the program and I love the way he skates it.  Some great spins and other nice moments in the choreography.  67.71...not bad, considering the issues.

Armin Mahbanoozadeh:  ARGH I was so sad when he fell on his triple lutz!  He had been doing so well.  Definitely lost some energy in the program from then on.  But he's a great skater.  Hope he can rebound in the free skate!  66.77. 8th place.

Alexander Johnson: ooh boo, he falls on triple axel.  Unfortunate fall.  Nice recovery on the triple/triple combination.  Spins a little slow and not loving that catchfoot. HOlds onto triple lutz.  57.30

So that's it.  Jeremy Abbott came out with fight but Ryan Bradley came out with charisma and quads!  Not a fabulous night otherwise, some of the top names had heartbreaking moments (sighhhh Adam Rippon and Arminn Mahbanoozadeh!).  But I am indeed excited to see this free skate...we may have a nice little fight on our hands.