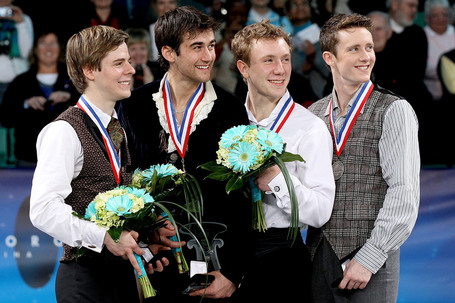 Waiting to see who will be named to the world championship team for the men.  The USFSA usually goes with the top three finishers unless someone has an injury petition or something.  But this year, the top three finishers are highly unlikely to score well enough to maintain three American spots at worlds next season (by having a combined total of no more than 13 for the top two), and also of course unlikely to even medal.  So will they instead go with fourth place finisher and two-time national champ Jeremy Abbott, rather than someone like Ross Miner, who has no worlds experience and did not score particularly well on the Grand Prix this season?  I don't know.  I would find it odd for them to break precedent this season.  Especially since Abbott has not been able to skate up to his potential at worlds and skaters like Dornbush and Miner made their marks today and shined on the nationals stage.

Who would you send?