Share All sharing options for: Mao Asada at Japanese Nationals 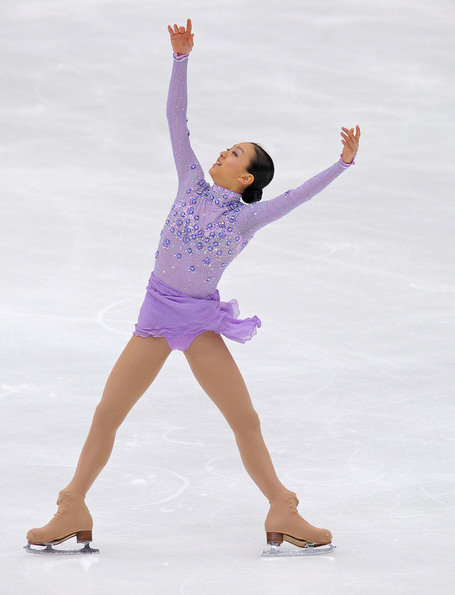 I finally got to take a look at how reigning world champion Mao Asada skated at the Japanese Nationals a few weeks ago, where she won the silver medal and secured her place on the world team.  It only took me a few extra minutes of youtube searching than it should have, since some obnoxious fans of a skater who will remain nameless decided to youtube bomb the Mao Asada at Japanese Nationals search with a bunch of non-Nationals skates.  My only consolation is that it hopefully took them longer to upload those videos (or rename them) than it took me to find the right videos.   Sighh....

But, I digress.  Asada at nationals was quite impressive.  She looked much more like her old self, and didn't fall once.  She won the short program, although I don't think it was one of the better shorts she's ever skated.  I thought the triple axel looked quite cheated, although I guess the judges disagreed.  I also thought she looked kind of low energy in the short.  I don't really like that program until the footwork near the end.

I thought she looked better (energy-wise) in the free skate, although she didn't win the free skate.  She also did some flutzing and some downgrades and I personally don't see any major improvement in her technique that she has reportedly been working through this season, but maybe it takes a more trained eye than mine.  I think the free skate is fine but not particularly memorable.  If she doesn't have the triple axels (and obviously no triple/triple these days), then Miki Ando's free starts to appear more impressive.  Although Asada will get the components edge.

That is all nitpicking, though.  Asada's nationals performance (in the short and free) would likely have won most of the Grand Prix events this season.  It was a great stepping stone back into medal contention and something to build on for the world championships.  I still wouldn't say she is a gold medal favorite right now, but I am hoping things are getting a bit more competitive.

What did you all think?  Are you happy about Asada's performance at nationals or are you concerned that she wasn't able to hold on for the win there?  Do you see the improvements in her technique?