Share All sharing options for: NHK Trophy Preview and Predictions 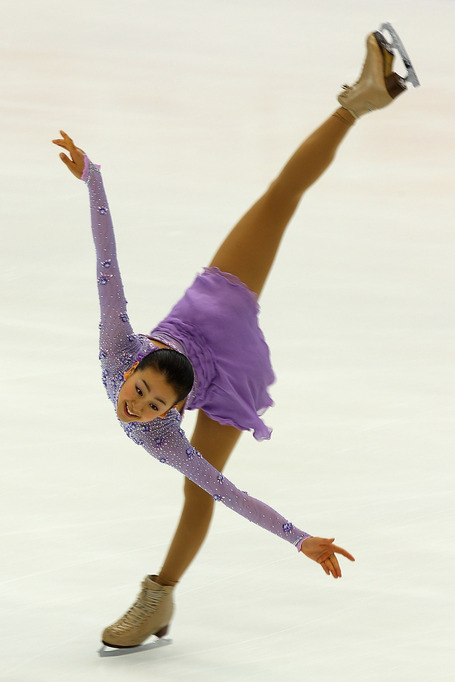 The Grand Prix moves from China to Japan this weekend with the NHK Trophy, which takes place in Sapporo.

Here is a look at what to expect from the event.

Why to Watch:  Former World Champ Mao Asada of Japan is making her Grand Prix debut here in front of a home-country crowd.  Last season saw a rebuilding Mao who had moments of brilliance but was mostly irrelevant in the Grand Prix and at the world championships.  We'll see which Mao we'll get this season.

This will also be the season's debut for Kiira Korpi of Finland. She sometimes struggles with jumps, but she can rack up a lot of points when she's on.  And don't forget Japan's Akiko Suzuki and USA's Ashley Wagner, who have both already medaled on the Grand Prix circuit this season.

Keep an Eye Out For:  USA's Agnes Zawadzki.  Her first season on the Grand Prix was a bit of a disappointment, but a medal here would be a great start for her season.

Why to Watch:  I'm happy to see Russia's Kavaguti and Smirnov go head to head with Germany's Savchenko and Szolkowy.  I have a feeling that unless S&S have a meltdown, they will come out the clear victors in the matchup. K&S may have the softer and more watchable free skate, but S&S have the more dramatic presence and tend to be cleaner technically.

Keep an Eye Out For:  America's Caydee Denney and John Coughlin.  They are obviously going to be gunning for the bronze medal, but they'll have to contend with Japan's Takahashi and Tran and Russia's Iliushechkina and Maisuradze to get to the podium.  Those two teams are definitely looking for redemption after disappointing Grand Prix season debuts.

Why to Watch:  Two of Japan's top skaters and most recent world medalists, Takahiko Kozuka and Daisuke Takahashi, are facing off against each other here.  They should really be the class of the competition, but you never know when a Tomas Verner  of the Czech Republic will sneak up on you.

Keep an Eye Out For:  Brandon Mroz of the USA will be here and perhaps we will see another quad lutz, which would be another historic first for Mroz.  If he has the technical goods, he has a shot at the podium.  This is a chance for redemption for the USA's Armin Mahbanoozadeh, who had a dismal showing at Skate America.

Why to Watch:  Shibutani and Shibutani were surely very disappointed in their debut last week at Cup of China.  Can they bounce back effectively or are they going to add more disappointment this week by finishing after Canada's Weaver and Poje?  I'm not sure.

Keep and Eye Out For:  Russia's Ilinykh and Katsalapov, who had a bronze at last year's Cup of Russia, and Germany's Shiganshina and Gazsi, who had some nice moments in their fourth place Skate America bid earlier in the season.