The Roller Coaster of NHK Trophy

Share All sharing options for: The Roller Coaster of NHK Trophy 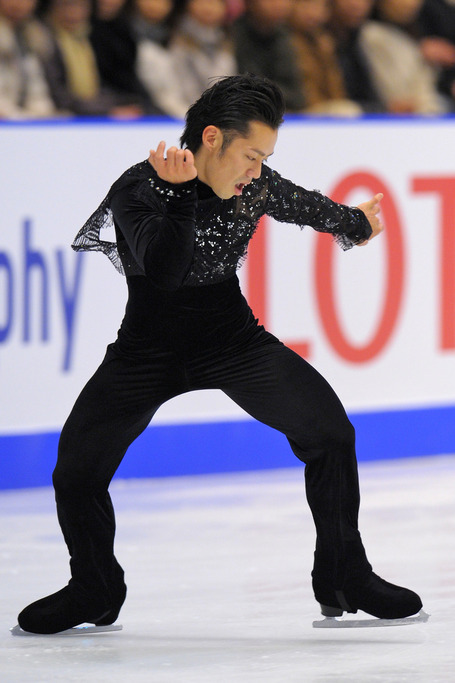 Stuck in Line:  Denney and Barrett have made zero impact on the Grand Prix this season, and they don't look like they will be world medal contenders anytime soon...or ever.  I'm going to give them a pass since it's their first season together, but it is too bad for American pairs after the success that Yankowskas and Coughlin and Evora and Ladwig had on the Grand Prix last season.

The Slow Climb:  I started really liking some of the programs this competition.  I love both of Ashley Wagner's programs (although I wish she had more speed!).  I'm also a big fan of both of Akiko Suzuki's programs.  I also found Kavaguti and Smirnov's Clair de Lune to be even prettier and less snoozy than last time.  And Daisuke Takahashi's short program...well, see below.

The Descent:  Despite some great performances, when you look at the protocol, you can see how very sloppy this competition was.  Some people looked like they were doing ok, and then you see downgrade and underrotation and edge calls littering the protocol.  Pairs and ladies were particularly at fault here.  Although, the men had their fair share of disasters as well.

Loop de Loop:  How about that pairs competition?  I saw Savchenko and Szolkowy downgrading jumps here and there in the free and that wasn't a good start...but they still had a chance, if only because Takahashi and Tran made a few errors of their own.  But S&S were just completely out of it - always scary to see people botch a lift like that and completely flake at the end.  I almost thought she was injured or something. I have to say...with as many mistakes as Takahashi and Tran make...they are still starting to win me over.  She is just too cute and they are adorable together. They have a nice energy, some interesting moves, and they are more polished than the also energetic Sui and Han.

Also nice to see the Shibutanis come back to win the free dance.  I think their short dance is just not working for the judges, but they were definitely on in the free dance and that gold should be a confidence boost.  Although, it should still worry them that their components were a few points lower than Weaver and Poje and Ilinykh and Katsalapov's.

What goes up must come down:  So nice to see Brandon Mroz landing the first quadruple lutz in Grand Prix history in the short program.  But wow, he really had nothing in the free skate.  I can't believe he ended up in last place after that great start.

The spills:  Poor Armin Mahbanoozadeh.  It is shaping up to be a disappointing season...but we all know that anything goes at Nationals.  Tomas Verner took a monster spill right on his knees in his crazy free skate (which started with the prettiest quad!).  Did anyone else get the impression he just totally forgot the choreography?  At one point he was just jumping up and down on the ice.  Still, I assume it was fun for the crowd!

Poor Daisuke Takahashi is just going to keep trying for that quad flip!  Here's hoping one day he finds it.  He had a few more sloppy jumps in the free skate but no one was perfect.

As beautiful as Kiira Korpi is out there, it was sad to see her jumps were completely not there in Japan.  Same goes for Agnes Zawadzki...she is trying out a mature style (and brunette one!) for both of her programs and I understand what she's trying to do but she needs to back it all up with jumps.

The Thrills:  Wow, can you all just please watch Daisuke Takahashi's short program once more?  I mean, I wasn't even warmed up to this program the last time I saw it and here I think it's just utter perfection.  Maybe it was the home crowd love, but it was just so amazing.

Another amazing moment was Mao Asada's free skate.  When she is joyful it is contagious like nothing else.  I don't know the last time we saw her smile like that.  It was an amazing performance and a wonderful way to come back after the disappointment of a popped axel in her short program.  Sadly, you take a look at the protocol and there were edge calls and downgrades, so that is still an issue...but it wouldn't take her out of contention against the crowd this season.

And how about Akiko Suzuki's short program?  She is always adorable but she's not always as confident as she came off in that flawless short.  Sad that she started popping jumps in her (otherwise delightful) free skate, but she had enough to pull off the win.

And Ross Miner's free skate was also beautiful.  I think he could be just a bit more charismatic on the ice, but he had some beautiful skating and he really capitalized on the mistakes of the rest of the crowd.

What did you all think of the competition?  Did you see anything that really thrilled you?