Share All sharing options for: Tough Love or Way Harsh? 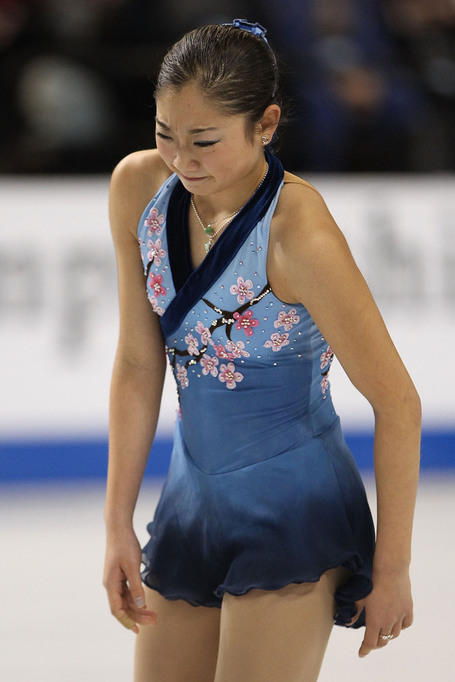 Frank Carroll has had it up HERE with Mirai Nagasu.  At least, that's how it sounds in this article by Phil Hersh.  Carroll is quoted as saying that perhaps Nationals will be the slap in the face Nagasu needs...and he also said she "didn't get her act together until three weeks ago."  Not only that, but Carroll told Hersh he was infuriated by the way Nagasu ended her program and found her to be...somehow mooning the audience while waiting to skate, by bending down to tie her skates.  I will go ahead and say maybe you had to be there because I had no idea she was...mooning them.  But the stuff about only getting her act together a few weeks ago seems to be less than ideal for someone who's been competing all season and hoped to make a spot on the world team.

Or is Carroll too harsh?  He is one of the world's top coaches and I'm sure there's a laundry list of others who would be happy to take Nagasu's place.  Mirai Nagasu is adorable and when she's on, I do think she's among the world's top three or four skaters.  What makes her so frustrating is that it's not like she'll have a fall here or there, but instead she'll seem to completely lose focus, like with that spin she messed up on Saturday night.  Her program wasn't bad but that spin made it feel much worse, as many have commented.  I guess I'm getting a little tired of the "sometimes Mirai doesn't want to work hard" thing.  In that case, I will probably have to stop reading articles about Nagasu, because that's the constant refrain.