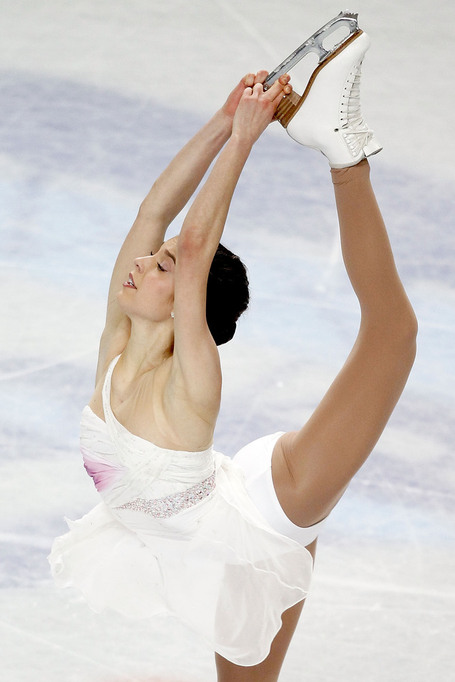 Newly crowned U.S. National skating champion Alissa Czisny was gracious enough to take time out of her schedule to answer some questions from Required Elements.  The interview was conducted via e-mail.

Czisny is a two-time U.S. national champion and the reigning Grand Prix Final champion.  She began skating when she was a toddler and is known for being one of the most graceful skaters on the ice and a skilled spinner.  Czisny won the 2009 national championship but was unable to make the Olympic team last season, finishing 10th at nationals.  Shortly after, Czisny left her coach Julie Berlin to work with Yuka Sato and Jason Dungjen.  She has had a resurgence this season, winning Skate Canada, the Grand Prix Final, and the U.S. National Figure Skating Championship.

Czisny is scheduled to compete at the Four Continents Championship in Taipei later this week and at the World Championships in Tokyo next month.  Czisny skates for the Detroit Skating Club.

Required Elements:  Alissa, so much has been made of the changes you've made this season.  How much of the troubles in the past have been physical versus mental?

Alissa Czisny:  I've made so many changes this past year, so it's hard for me to say how much of the past troubles were physical and how much were mental. Everything is different, from my perspective on my skating to my jump technique to my training style to my coaches. My new coaches, Yuka Sato and Jason Dungjen, have been extremely instrumental in turning my skating career around. They have guided and directed me, and most of all, they have believed in me. All of their work in helping me has manifested itself in my competitive results this season, I believe.

RE:  How exactly have you changed your mental approach to skating this season?

AC:  After last season and its disappointments, I seriously reconsidered my skating career. I didn't want to continue along the same path as before, and I really searched myself to see what I wanted to do. I discovered that I truly loved to skate and that I wanted to make skating my career. Approaching my skating from a fresh perspective has greatly helped my mental preparations this season. And I'm constantly reminding myself of my goals for this season, which helps me stay focused through everything that goes on.

RE:  Have there been any major changes to your technique as well?

AC:  Yes, my coaches began working on changing and improving my technique not long after I began working with them. While changing technique is not as easy process, they have been extremely patient and understanding. I know that it's still a work in progress, but I'm glad to see an improvement in my jump technique.

RE:  What was it like winning nationals this year, particularly after last season?

AC:  Going into nationals this year, I struggled a bit, being haunted by last year's disappointments (in myself and how I'd skated). But I realized that I am a completely different person and skater, and I went into the competition focused on my goal. After finishing my short program and especially after finishing my long program, I was overwhelmed by emotions. But most of all, I was happy to have overcome the past and was happy to have skated my best. Winning for the second time was an awesome feeling, but it was second to the feeling of accomplishment that I felt for persevering after last season.

AC:  I've invested so much of my life into this sport and I have a passion for skating, so I'm fairly certain I will continue to be involved in the sport for years to come. In what way, I do not yet know. I love touring, so I hope that will be a part of my future. And I enjoy coaching, as well, so I hope to be able to pass along my love for the sport and the things I've learned from my involvement in the sport!

RE:  If you weren't skating, what would you be doing?

AC:  Hmm, considering I've been skating for almost my entire life, this is a difficult question. I'm sure I'd be active in some sport, or maybe I'd be a dancer. I love to travel, so I'm sure I'd be doing something that involves travel, also.

RE:  You were recently in a Super Bowl ad for Chrysler that also featured Eminem.  A lot of people really loved this advertisement for the way it represented Detroit.  How were you approached by Chrysler and did you have any idea of what the finished product would be like?  What sort of reaction have you received?

AC:  Chrysler and the people involved in the production of this commercial found me through the Productions Plus-Talent Shop (Bingham Farms, MI) and through my skating club (Detroit Skating Club). They were looking for a female skater who was in her twenties and could spin--and I fit the description perfectly! The day we filmed the commercial, I spent several hours spinning at the outdoor rink at Campus Martius in downtown Detroit. I knew the theme of the commercial, but I didn't know that it was going to be aired during the Superbowl! When I finally saw the commercial, I was astounded by the finished product--it portrays Detroit so well and is so inspiring, not only to us Detroiters but also to Americans in general. I was honored to be a part of the commercial, and I have been continually surprised by the positive response to the commercial!

RE:  Are there any International Skating Union rule changes rule changes over the years that have particularly helped or hurt you?  For example, your spirals are gorgeous but that element was recently eliminated from short programs.

AC:  I sincerely wish that the ISU had not eliminated the spiral sequence from the short programs (and not just because I can gain a lot of points from that element!). Our sport is both athletic and artistic, and I believe the spiral sequence helped to counterbalance the athletic side of the sport (the jumps) with its more artistic qualities.

RE:  You've mentioned your ballet training in other interviews.  Can you tell us a bit of what that's consisted of over the years and how it's helped your skating?

AC:  I took ballet lessons from a very young age and have continued to take lessons since then. Although I only take two hours of ballet per week, I feel that those classes are still very beneficial to my skating. Ballet teaches body alignment and helps strengthen the muscles, in addition to promoting elegance and performance qualities that can be directly related to skating, I think.

RE:  What was it like touring with Stars on Ice?

AC:  I immensely enjoyed touring with Stars on Ice. It has always been a dream of mine, to tour with Stars on Ice, so to be able to be a part of that cast was a dream come true for me. I learned so much during the tour, and I really had fun performing so many times! The group numbers were especially fun, because I don't usually get to perform with other skaters--and performing alongside the cast of Stars on Ice was amazing, because they are all such wonderful skaters!

RE:  What has been your best moment in skating?

AC:  It's hard for me to pinpoint one exact moment that has been my best moment in skating. But I think that this year has been (and still is) my best and most favorite of my career so far. It certainly hasn't been easy, but persevering through everything has made the successes that much sweeter.

RE:  Which skaters currently competing are you a fan of?

AC:  Well, I have to say that of the current group of skaters competing, Jeremy Abbott is definitely one of my favorites! I have the privilege of seeing him skate every day, and I'm always inspired by watching him. His edges and his skating quality are amazing! And he has been such a great friend and training mate, as well!

RE:  Finally, have you set a goal for the World Championships?

AC:  Yes, I have set personal goals for myself at the upcoming World Championships, and I'd also like to help earn three spots for the US team for next year's Worlds. Most of all, though, I'm looking forward to competing my very best at the competition!