Share All sharing options for: Kim Unsure about Worlds 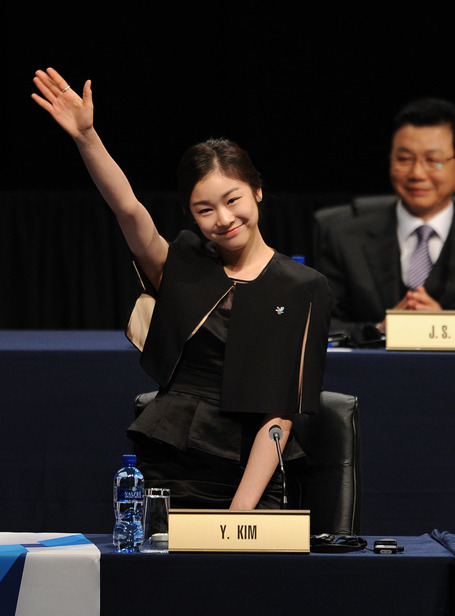 Olympic champion Yu-na Kim is unsure about whether she'll compete in the 2012 world championships in Nice, France, according to Joongang Daily.

I feel like the absence of Kim from the normal competitions throughout the season, such as the Grand Prix events, is a huge loss.  It was particularly felt last season, when the women were underperforming.  It will likely be worse this year, without even a Miki Ando to at least land a bunch of triples to justify her Grand Prix medals.

However, since she is missing the rest of the season, I won't feel quite as devastated if she decides to sit out worlds.  Seeing her in worlds last season was so anticlimactic.   I assume that's because I was expecting a lot more than Kim could deliver the first time out with new programs, especially after a depressing season and not having seen her compete for a year.  She was still an amazing competitor at that event and she still won the silver medal, but something was missing (not to say it would be similar this season, who knows).

I am excited to see which skaters emerge this season as the major competitors but I'm also looking forward to seeing if Kim decides to make a more competitive push for the 2014 Olympics.  She definitely has some time to make that decision, though, and hopefully she's enjoying her time away from competition (though it sounds in that article like she is still being run ragged! Hopefully she is getting some rest every now and then).