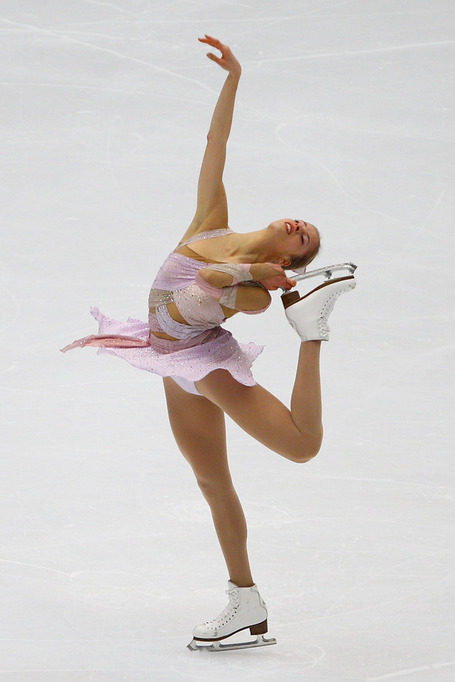 For the first time in years, certain skaters are allowed to compete in three events in this year's International Skating Union (ISU) Grand Prix series.  The "seeded" skaters (those who finished 1-6 in the most recent world championships in Moscow) are eligible to compete in a third event.

The Grand Prix Final is made up of the skaters who have earned the most points throughout the Grand Prix series, based on their event placements.  For those skaters who choose to compete three events, they will be allowed to have the best two out of three placements count towards point totals.  Additionally, the maximum number of competitors has decreased this season, from 12 to 10 in singles events and from 10 to eight in ice dancing.  There is also a minimum score requirement for this year's competitors.

According to the ISU's latest entry rosters, the skaters and teams who appear to be taking advantage of this development are:  Women - Carolina Kostner (Italy), Men - Michal Brezina (Czech Republic), Pairs - Yuko Kavaguti and Alexander Smirnov (Russia), Aliona Savchenko and Robin Szolkowy (Germany), Ice Dance - Kaitlyn Weaver and Andrew Poje (Canada), and Nathalie Pechalat and Fabian Bourzat (France). There are various TBD slots and I don't know which date the ISU rosters were updated, so this list may change when we get down to the events.

Most of the skaters above were very likely to make it to the Grand Prix Final to begin with.  This year's system provides extra opportunities for the top-ranked skaters to earn money and to qualify for the Grand Prix Final.  But more importantly, it makes it more difficult for newer teams or skaters (a Haruka Imai or Kanako Murakami of last year, for instance) to make it to the Final or receive additional chances for major competition experience.  The seeded skaters will take up more spots this season in a smaller field, and they will be able to "junk" points for their lowest placement - points that might have otherwise gone to a skater on the Grand Prix Final bubble.

Although the minimum scores requirement is obviously a way to ensure higher quality overall, I'm not sure why ISU chose to extend a third opportunity for competition to various skaters.  I assume they'd like to make sure they have some bigger names in more competitions, and they'd like the Grand Prix Final to be the highest quality competition possible, which may not have happened last season. But with the diminished fields and the emphasis on seeded competitors and the stipulations on who gets assigned to Grand Prix placements based on world championships performance, it seemed that they were already going to have a more experienced field this season anyway.

What do you think of the changes?  Are you excited to see more Carolina Kostner?