The Skate America lineup has been finalized, according to Icenetwork.  Although the International Skating Union hasn't even updated its lineups yet, it has been announced that Joelle Forte (ladies), Armin Mahbanoozadeh (men), Caydee Denney and John Coughlin (pairs) and Isabella Cannuscio and Ian Lorello have received the final slots.  Let's take a look at the additions:

Joelle Forte:  Forte is the biggest surprise here, for me.  After coming in twelfth at the 2009 U.S. Nationals, she then planned to skate for Azerbaijan in 2009-2010 (although that didn't go anywhere) and came back for last year's nationals where she placed 9th. I believe this is her first Grand Prix event.  Let's see how she fares against the triple toe loops Laura Lepisto and Carolina Kostner will be throwing at her in the competition (oh gosh, the season hasn't even started yet and I'm already making fun of difficulty levels). 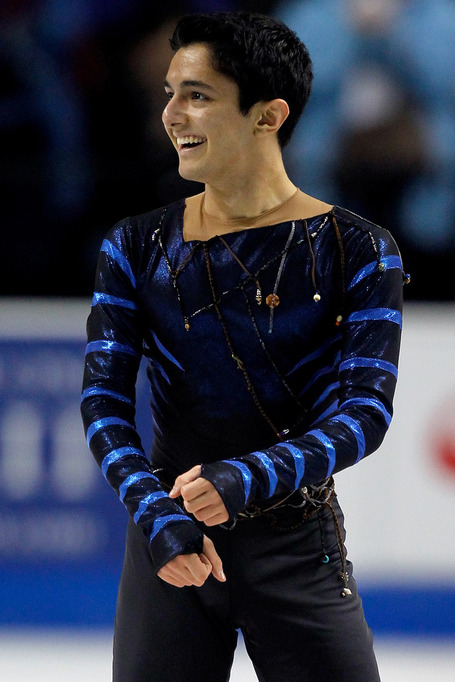 Armin Mahbanoozadeh:  Mahbanoozadeh was a surprise bronze medalist at last season's Skate America, and it was his only Grand Prix assignment.  He engineered a bit of a campaign to get an invite to another Grand Prix when a skater dropped out, but it was not to be.  It appeared he might be in the same boat this season, so I'm glad to see that he gets a second Grand Prix assignment.  He'll also be competing in NHK Trophy.  Mahbanoozadeh is a beautiful skater and he will be doing his free skate to Kill Bill this season, not Avatar (some people writing for the blog are hoping the Avatar programs are behind us.  I am the only person writing for the blog).

Caydee Denney and John Coughlin:  Well, duh.  They just got together and are the best U.S. pair.  I am wondering how many more OMGSOAMAZING articles will be published about them and their triple twist before the Grand Prix.

Isabella Cannuscio and Ian Lorello:  These two came in sixth at their first senior Nationals last season.  They were on the Grand Prix circuit last season, with their best finish seventh at Trophee Eric Bompard.  There are a bunch of new ice dance teams this season who are getting some attention, but will this established pair be able to steal some of the fire?  We shall see!