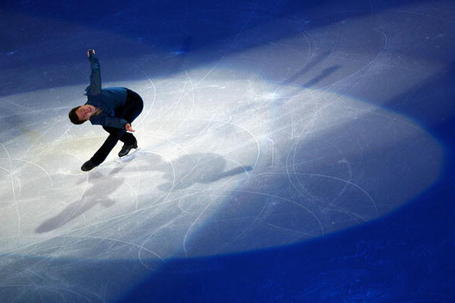 The 2012 World Figure Skating Championships kick off tomorrow in Nice, France. Let's take a look at what we might expect to see from the competitors in the men's division. You guys will never guess who I think is going to win...

Let's get this straight. Canada's Patrick Chan will win this thing. In fact, I almost feel like making a ridiculous promise to you all about what I will do if he does not win this thing. That is how confident I am that he will win. The only true question here is whether he will break all the records doing it. The only way Patrick Chan loses this is if he falls four or more times (I called it!) and even then, I think a skater like Daisuke Takahashi of Japan or Jeremy Abbott of the USA will have to land a quad and be otherwise clean in order to come close.

This is because Patrick Chan is going to get sky-high grades of execution on the jumps he does land, because he has amazing technique. When he lands those quads (and he usually does), they are textbook. And Chan will also get the highest program components of all of the skaters. I don't question him getting high components, but I don't think his should be the highest. Loyal readers know I prefer what I deem to be Takahashi's more legitimate passion to Chan's sometimes pageanty-ness (new words COMING AT YOUR RIGHT NOW!). But anyway, Chan is going to win. Also, the sky is blue (well...usually).

Will the United States Get a Medal and/or a Third Slot at Worlds Next Year?

We are always so worried about getting that third spot at the world championships and the Olympics. Why do we care so much? So that more Americans can compete? That's always a nice thing. But, hey, three Americans competed last year and it wasn't exactly special. So..why do we care so much? I guess what I'm saying is, I would love for more Americans to get to compete, but I would much rather see an American have a chance to medal. Obviously, these are not mutually exclusive. But I guess at this point, I'm not going to be satisfied to see Jeremy Abbott in the top four or five. I want to see him medal. Too much potential not to finally medal. And I think he has a chance. On a good day, he is one of the best skaters in the world. But I would never use that precursor "on a good day" when I describe Patrick Chan. And therein lies the problem with Jeremy Abbott. He has a quad but it is not a sure thing. When he does land jumps he has the potential to get high GOE marks and his choreography is impeccable - I love both his short program and free skate this season. His free skate is among my favorite programs of the year. But Abbott has me worried, because he turned in an appalling couple of performances at the International Challenge Cup in The Hague recently. Those of you with glasses half full would say he needed to get those bad skates out of his system. Those of you with glasses half empty would say, as is his habit, Jeremy Abbott has peaked too early and is not a true medal contender. I never want to count a beautiful skater like Abbott out but I worry. I do worry.

Adam Rippon is another strikingly beautiful and elegant skater. And he always has the potential to surprise. I don't know if he will be attempting a lutz, but it hasn't been very lucky for him this season. And he's been stuck on the number four - fourth place in both Grand Prix competitions as well as at Four Continents. I think he should actually have been able to come out and win Four Continents as he has done in the past. Rippon seems a skater who international judges find it easy to overlook, and that could be trouble. But in his only appearance at the world championships in 2010, he came in 6th. So, there's no reason to think that the team of Abbott and Rippon won't be able to get the US back its third worlds spot. But like Veruca Salt, I want to see the Americans win a medal, and I WANT IT NOW!

Will Daisuke Takahashi Find his Form?

Though I don't think Takahashi is a clean enough skater to truly contend with a clean(ish) Chan, the 2010 world champ does have the power to mesmerize and excite an audience. I want to know if he will land another quad (he's only landed one this season) and if he will be able to do justice to his glorious programs. His choreography this season is dynamic and more nuanced than his past programs, and I really love what he is doing out there. And I would love it even if he fell all over the place. But I would really like to be able to enjoy his skating without the sloppy jumps. He also usually has the ability to fire up any crowd so I'd love to see him do that here. If he does win the silver medal, I predict it will be with more enjoyable/exciting programs than Chan wins the gold with.

What of the other Japanese Skaters?

After an incredibly successful 2010-2011 campaign that culminated in a silver medal at the world championships, Takahiko Kozuka somehow fell off the radar this year. And by fell off the radar, I mean he medaled all over the place, but never won a competition. And he did not look great doing what he was doing. But he's a lovely skater, he's got great technique. He doesn't have the connection with the audience that a Chan or Takahashi has, but if he can lay out clean programs with the quads that he is able to do, then Kozuka could be a medal threat again.

And I've had such fun watching Yuzuru Hanyu this season. He still looks young out there but he has moments of real grace and elegance. He won Cup of Russia so he proved that he should not be completely counted out as a medal contender. If the others err, he could be the young up-and-comer we see on the podium this season.

You have to think that being in front of a very friendly home-crowd helped Russia's Artur Gachinski turn in two of the best performances of his life at last year's world championships, where he won the bronze medal. Will having France be the host have the same effect on former world champ Brian Joubert, who always has roller coaster seasons but most recently won the International Challenge Cup, though he finished eighth at the European Championships. Joubert made headlines at the Cup by completing two quads in the short program. Will he bombard the judges with quads this time around?

Florent Amodio has been on a bit of a downard spiral internationally since last year's world championships, but he recently snagged the bronze at the Europeans and he can be a lovely skater. Will he do a quad and regain the love of the international judges? He could be a dark horse medal contender.

Who Else to Watch

Don't count Gachinski out, though he hasn't recaptured his world championship magic so far. And Spain's Javier Fernandez has been dazzling judges with his short program this season; if he does it again he could put himself in medal contention. Song Nan of China has been using his jumps to keep himself in the conversation, but I'm unsure it will be enough to medal here. And Czech Republic's Michal Brezina has come in fourth place for two seasons. He doesn't look ready to make the move but if he skates well and lands quads, don't count him out.