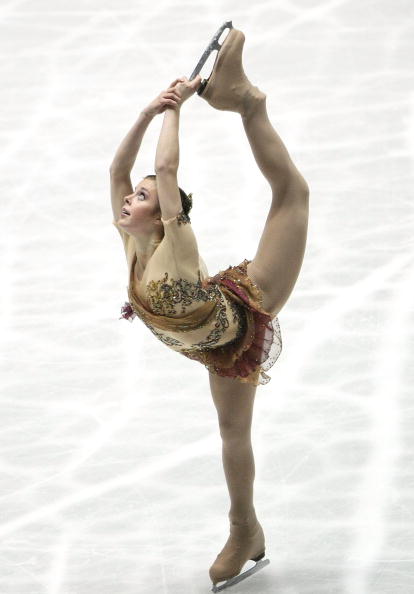 Oh, the ladies. I think it's obvious that the front-runner these days is Italy's Carolina Kostner, but there's no reason she should be an overwhelming favorite. She doesn't have the hardest jumps and she isn't always the cleanest, but she's helped by her high program components and others' sloppiness.

As Jackie Wong of the Examiner points out, Japan's Mao Asada has a great advantage when it comes to base value of jumps she will be attempting at worlds. However, it is very common for Asada to get a downgrade or underrotation call, particularly on her triple axels. So those base values don't mean as much as they may seem to. Asada will always garner high components because she is a beautiful skater with some glorious spins and positions, but for her it comes down to jumps. If she lands enough, she should win the competition. But she isn't usually clean, so you can't really bet on her. As far as consistency, Asada has had a very good season. But she hasn't been great, she's been good enough. And she recently came in second to Ashley Wagner at the Four Continents Championship. But maybe she'll come charging back. Asada also has had to deal with her mother's death from illness earlier in the season, so it has likely been an emotional time for her, though it's unclear whether that would affect her skating.

Carolina Kostner of Italy has had the best season of the female skaters. She won the European Championships and the Grand Prix Final. Granted, her competition has been pretty unimpressive. But she's got high program components, she is very consistent with the triple/triple, and she does not seem headed for a disaster. I will be surprised if she doesn't medal again (she won bronze last year) and she is not a bad bet for gold.

I have always been a fan of the USA's Ashley Wagner not just because I'm pretty sure we share an orthodontist (yes, I am grown-up with an orthodontist), but also because I think she is a fighter. But she's always been kind of a sloppy fighter. This year, with her switch over to coach John Nicks, she's taken care of a lot of those sloppiness issues, dealt with her short program demons, and come away with wins at the National Championships and Four Continents, where she edged out Asada. She doesn't have the most difficult technical programs in the world, and she doesn't have the spins and overall elegance of Alissa Czisny. But she has two strong programs this season and she may be peaking at the right time. If there was ever a year where I thought Wagner could pull through and win (let alone medal), it would be this year. So let's hope she can take advantage of the situation. Another interesting thing that Wong pointed out was that Wagner actually got comparable program components to the top ladies at Four Continents. That doesn't tend to happen for her. If she can continue that into worlds, she will have an even better shot at medaling. But who knows if that was a fluke.

Alissa Czisny of the United States is coming off of last year's Cinderella season with a bit of a hangover, it seems. Though she started out the season strong, a calf injury hampered her at the Grand Prix Final and then she lost her national championship to Ashley Wagner. She turned in some embarrassing performances at the recent International Challenge Cup to come in third behind Valentina Marchei. She seemed to be a head-to-head contender with Kostner at the start of the season and she is one of the most beautiful skaters in the world. She has been getting higher program components this year and she has lovely spins and very strong choreography. Unfortunately, the jumps are giving her troubles, and they may be her downfall here. Don't count her out though; if anything her 2010-2011 season proves that just when you think she's done she can come roaring back.

Japan's Akiko Suzuki was very strong this season. There were moments when she looked like such a winner. And even when she's a little sloppy on the jumps, she is a joy to watch. There's no reason to think she isn't a medal contender, but she really does have to land those jumps. Her components will lag behind those of some of the other top skaters so she doesn't have any points to spare. If she still has the confidence she displayed earlier in the season, she will be a force to be reckoned with. But she's had about three months off from competing - is that too long?

Alena Leonova of Russia is a complete wild card. When she lands those jumps and charms the crowd, she is a medal threat. If you are just looking at technique and artistry and that sort of thing, she's not really up there with the top skaters. But you can tell that she loves what she's doing this season and if that translates in clean skates, Leonova could be on the podium. Leonova has landed triple/triples in the past but she suffered a knee injury at European Championships, her most recent event, where she only finished seventh, so it's unclear how much that will be affecting her (if at all) here.

Who Else To Watch

Elene Gedevanishvili of Georgia always seems to have a program that lands near the top; if she can put two such programs together, there could be a surprise on the medal stand. Keep an eye out for the underachieving Ksenia Makarova and the overachieving Polina Korebeynikova of Russia. And it's been a bit of a breakthrough year for Sweden's Viktoria Helgesson. Italy's Valentina Marchei surprised many with her silver medal at the International Challenge Cup - where she bested Czisny. And Japan's Kanako Murakami is mired in a bit of a sophomore slump but who knows when/if she'll break out of it.