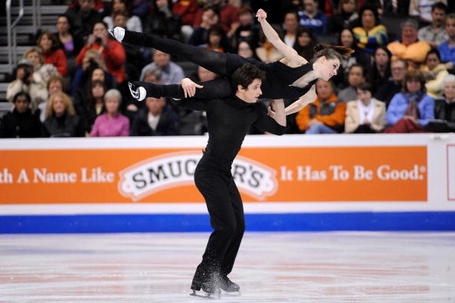 This will be a battle between Canada's Tessa Virtue and Scott Moir and America's Meryl Davis and Charlie White. It will be a big story if these teams don't finish one-two in whatever combination. They are still notably better than any other teams competing right now. They also both have absolutely lovely free dances. I prefer Davis and White's Die Fledermaus to Virtue and Moir's Funny Face. However, Davis and White had a lot of trouble with their levels at the recent Four Continents Championship, where they received lower levels than Virtue and Moir on a few elements and were thus at a disadvantage. So, as with many competitions between these two pairs, this competition may well come down to who can be just a bit better about squeezing the most points out of the technical elements. They are both going to get sky-high program components. Additionally, if one of the teams makes a major error, it will likely be the other team who will be able to take advantage of it. Thought Davis and White won the Grand Prix Final, I would say momentum may have shifted over to Virtue and Moir, so they might be able to regain their world championship from the Americans, who won last year.

Less about dark horses for a victory than about top contenders for a bronze medal. France's Pechalat and Bourzat only just got the all-clear to compete after Pechalat broke her nose earlier this month and she's had difficulty breathing, so who knows if they will be in top form. Unfortunate for them -they began the season dealing with Bourzat's bronchitis and now they have a broken nose. They were having a fine season overall, though, coming in third at the Grand Prix Final and most recently winning the European Championships.

One team with a lot of momentum this season has been Canada's Kaitlyn Weaver and Andrew Poje. They recently won the bronze at Four Continents and will be looking to take advantage of Pechalat and Bourzat's possibly injury troubles to squeeze into the third position.

Maia and Alex Shibutani of the USA made the most of Pechalat and Bourzat's mistakes last year at the world championships where they finished with a surprise bronze medal. They have had their ups and downs this season, and at times it seems like the international judges are just not sure what they think of this young brother-sister pair. They have great technique and execution but they don't have the presence of some of the other couples and they don't have the greatest programs this season. But if others make mistakes or don't wow the judges, the Shibutanis could repeat their bronze.

Look out for Bobrova and Soloviev of Russia, who came in second at Europeans. And America's Madison Hubbell and Zach Donohue are making their worlds debut after coming in fifth at the Four Continents.